To Fill Rooms, Hotels Are Turning To Airbnb 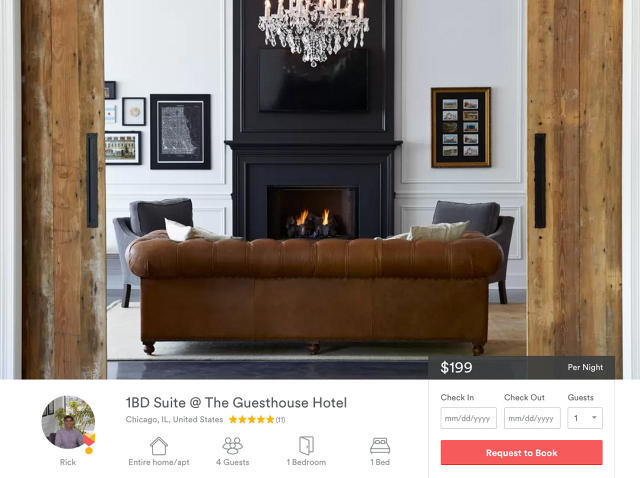 Managers at boutique hotels say they use the platform similarly to the way they use booking services like Expedia and Priceline, which typically charge hotels a 10% to 25% fee per reservation. Airbnb, by contrast, charges hosts a 3% fee. “The commission is so much more attractive,” says Stephan Westman, a hotel industry consultant who has listed hotel rooms on Airbnb. “Any hotel that needs to fill rooms, I don’t understand why they wouldn’t need to use it as one of their marketing arms.”

Airbnb has already established itself as a booking agent for bed-and-breakfasts and hostels, so much so that hosts have options to categorize their listings as “bed and breakfasts” or “dorms.” Boutique hotels are another step toward becoming not just a platform for booking rooms in other users’ homes. Hotels are a big business. Online travel agents account for 13% of global hotel bookings, according to a 2013 white paper by travel industry research firm Phocuswright. Expedia, which owns Hotels.com, Travelocity, and Orbitz, did $5.8 billion of business last year. Priceline, owner of Booking.com and Kayak, did $8.4 billion. Both companies list Airbnb as a competitor in their SEC filings.

Earlier this month, Airbnb released data that showed 3,500 listings in New York City that belong to hosts with three or more entire home listings on the platform. Airbnb’s critics have called listings like these “Airbnb hotels,” or apartments rented in already tight housing markets for the sole purpose of booking short-term guests. A small number of them are boutique hotels.

The Box House Hotel in North Greenpoint, Brooklyn, which offers apartment-style suites, lists at least five of nine rooms on Airbnb; The Riff in Manhattan, which recently converted from hostel to hotel, lists one private room in a “hipster hotel/hostel;” and The Union Hotel in Gowanus, Brooklyn, advertises “plush carpeting floors, quilted custom beds, penny-tiled bathrooms, and deco chandeliers,” and concludes, “Cutting edge is an understatement.”

The Guesthouse Hotel in Chicago, which was named one of Chicago’s best new hotels of 2014; The Sea Rock Inn, a budget hotel in Los Angeles; and The Lumber Baron Inn, a mystery theater and wedding venue in Denver, also list on Airbnb.

Read rest of the article at: Fast Company

Related Articles
7 Effective Online Upselling and Cross-Selling Strategies for Hotels
While competition increases and new ideas are constantly being thrown out, ...
6 Simple Steps to Write Effective Content That Converts

New Rooms Upselling: Increasing Revenues in a Simple Way
After long preparation time, we launch one of this year’s main improvements...
Selling Your Last Available Hotel Room
Optimizing the distribution mix is important at all times for any hotel bu...
Gamification: Offering Guests an Interactive and Engaging Experience
Whilst a relatively new concept, gamification could be a powerful tool in r...
Spain: Strong German Travel Interest Uptick in Major Tourist Destinations
This data will help Spanish destinations update their revenue management an...