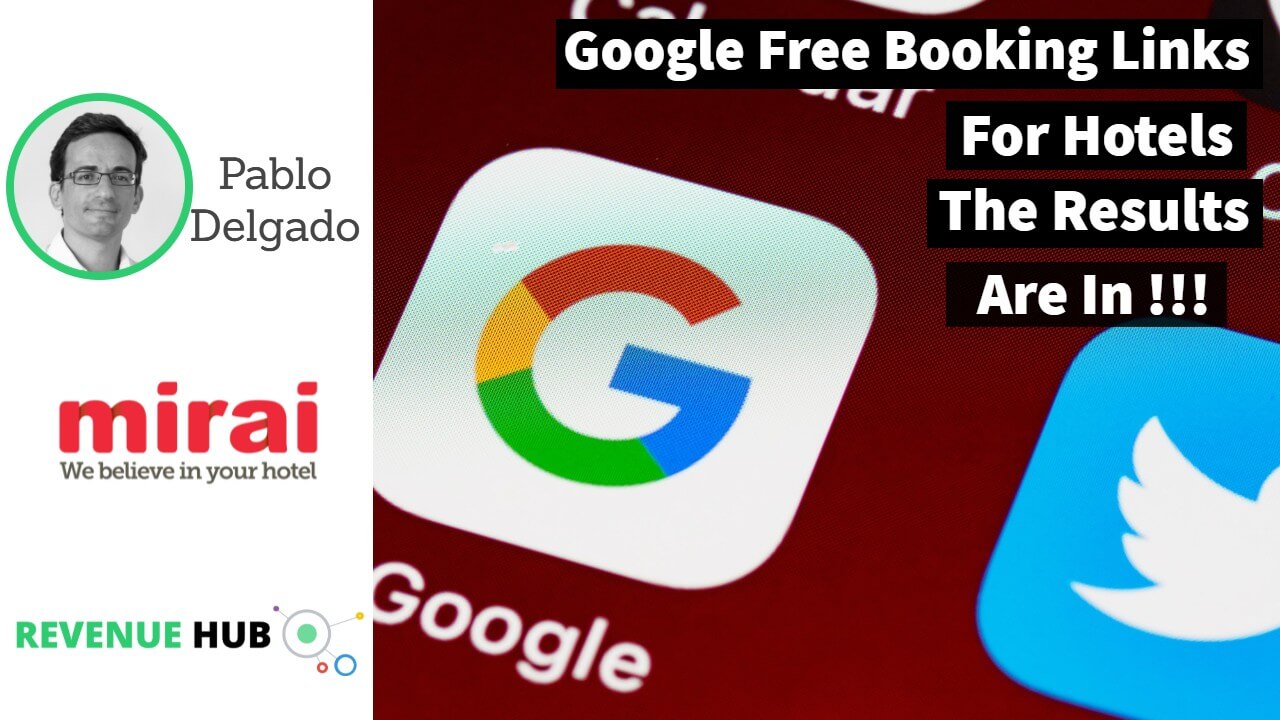 Google launched free booking links within Google Hotel Ads on March 9th. It was the company’s biggest move in recent times and generated an endless debate about where Google is heading in the online travel ecosystem.

NB: This is an article from mirai, one of our Expert Partners

Here is an interview we did with Pablo Delgado, CEO of mirai looking at the impact of the Google Free Booking Links

Eight weeks later, the dust has settled, and we are finally able to evaluate performance based on a variable previously unavailable: data. We dove into the impact of free booking links (‘unpaid’) comparing the 8 weeks since the launch (Mar 9 – May 4) to the previous 8 weeks (Jan 12 – Mar 9).

The areas of study and executive summary are:

It is important to point out that FBLs are only present in the My Business (travel) hotel site and not in other popular Google Hotel Ads placements such as search, maps and the rest of travel.

As Google explains in its documentation, Hotel Ads only breaks down its metrics into two categories but, unfortunately, placement is not one of them.

Therefore, if we use all available data we would not be comparing “apples to apples” as FBLs do not show up in maps or search results. To get around this problem and “isolate” the My Business data, we defined three different scenarios as steps in a funnel from top to bottom.

Although we needed a number to reach a conclusion, the reality is that the share of FBLs depends on where in the funnel the user resides. These 17% and 11% more closely represent the “apples to apples” scenario that we previously called “selected dates”. However, the higher in the funnel the lower the percentage of share captured.

Before comparing KPIs such as “average daily rate” or “conversion rate”, we first had to scrub the data and identify the situations where the user was presented with both options: the paid ad and the free booking link.

Otherwise, numbers would be biased towards those hotels where FBLs had a higher share (because paid links were not present) and would hinder the real benchmark. We picked hotels and markets where the impression share exceeded 90%, guaranteeing that the user was presented with both links most of the time. The data unveils some expected results and an interesting surprise.

Out of all questions, probably the most interesting one is to what extent FBLs represent new sales or actually cannibalise existing sales from paid campaigns.

Our first approach was to focus on hotels that did not have an active paid campaign at the time FBLs were launched. These hotels are very representative as they, obviously, did not have any clicks or sales from Hotel Ads. All sales came from FBLs and, therefore, the analysis was very simple and insightful. With this group of hotels, our numbers show that:

The second group of hotels that we analyzed were those that already had an active campaign in Hotel Ads. In these hotels starting March 9th, users were presented with two options to choose the same direct channel (paid and unpaid).

We measured the share of sales coming from paid Google Hotel Ads campaigns before and after the launch of FBL. We then added those results to the share of FBL to get a combined total.

How do we reconcile the difference between 0.84% and 4.32% incrementality?

A sanity check that would reconcile both numbers could be the following: Let’s assume a hotel loses the bid and is excluded from the paid positions 20% of the time. On these occasions, FBLs represent the same incremental 4.32% in sales. If we multiply both numbers (20% x 4.32% = 0.86%) we get a very similar number to the 0.84% above.

So far, there is no apparent negative impact on Impression Share of existing campaigns

We had expected to see an impact on the impression share of the existing paid Hotel Ads campaigns. However, we have yet to see one. It actually increased by 1.3%. We broke down the data by source market, but saw no significant differences there either. This unexpected outcome may have been caused by:

The introduction of free booking links was a major move by Google and a potential shake-up of the current meta ecosystem, giving the direct channel more options to compete with OTAs. Eight weeks is not much time, but it is enough to make some conclusions based on real data and not just opinions.

For those who are active in FBLs, we’d recommend each of you track down your own numbers. Check your Google Analytics to come to your own conclusions. If you don’t have the data, ask your integration partner for it. At Mirai we tag the FBLs differently so that you can easily differentiate the traffic in Google Analytics and measure its impact.

For those hotels that are not present in FBLs yet, contact a Google Integration partner so you can benefit from this free, incremental visibility and traffic. At Mirai, we can help you onboard your property to Google Hotel Ads and FBLs, even if you are not using our booking engine.

To learn more about how to boost your direct channel in metasearch click here or contact metasales@mirai.com

Related Articles
A New Way to Look at Your Hotel Marketing Campaigns
Marketing should understand where the gaps in occupancy and segments lie an...
Five Experiences that Build the Revenue Manager Résumé
The traditional career path for most Revenue Managers is to start in Reserv...
Temporary Closure Digital Checklist for Hotels
In this video we are talking with Stephanie Smith as she takes us through h...
CRM or How to Automate Most of your Retention Strategy and Direct Sales
Retention is key for your hotel. It's helps build a long-term business mode...
Greek Travel Demand Report: Flight Searches Grow But Begin to Slow
July is preferred for British, Greeks and Germans; Italians and French pref...
How Can Commercial Teams Gear Up For Return Of Airline Travel
The new normal has made all historical data redundant, making it stressful ...