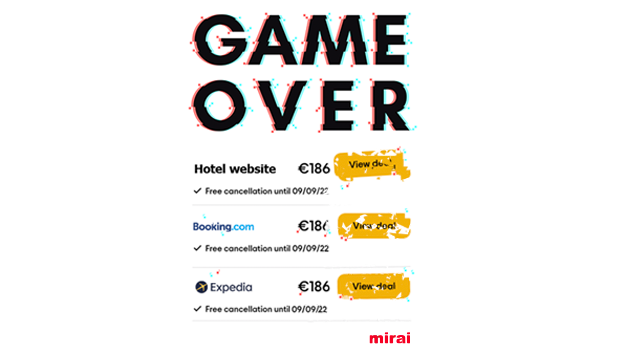 Parity is Over: Define New Pricing Strategy with Booking and Expedia

Many hotels keep thinking that rate and inventory parity is the right online distribution strategy.

NB: This is an article from mirai, one of our Expert Partners

It never was, and it never will be. From a hotel perspective, it sounded good when the internet was still in its infancy “Same price offered on all channels and whoever finds the customer wins”. What could possibly go wrong?

From a guest perspective, however, it was a no brainer. Who would book direct if major OTAs offered the same price? Would you (don’t cheat)? A few lost users and maybe those who already know you would book directly, but for everyone else, especially international travelers, OTAs are the most likely option. Trust, customer service, and the best technology are just a few justifications.

And off we went. With an ineffective parity approach, but in a happy mood. In the end, parity was not that bad compared to the opaque, offline world we were emerging from. It didn’t last long though. Despite having the same rate for everyone in our channel manager, some OTAs showed better rates than our direct channel. Blame the “merchant model” – the traditional model of Expedia.com and the aspirational one for Booking.com.

Merchant model allows OTAs (and those they resell your rooms to) to reduce their margin and become more competitive than the “agency channels”, including the direct. Under these circumstances, clients who booked direct were either heroes or naïve. Or probably both.

At this time, some were still convinced that parity was the right strategy and that disparities could be dealt with by asking OTAs to stop doing (or letting others do) to them. A path to nowhere.

To make things even more complex, OTAs made up new ways to further decrease prices and did so exclusively in their channels. In exchange, hotels received the reward all hotels dream of but very few really understand: more “visibility”.

Most hotels took the bait and happily implemented the two suggestions. Only a few followed suit in their direct channel and did the same. The rest simply did nothing, giving away their most powerful asset to the OTAs. More “visibility” was worth it. Consequently, OTAs gained even more market share.

Hotels react: loyalty and mobile discounts in direct too

Fortunately, enough hotels reacted and implemented the same strategies on their own direct channel. A good loyalty program and special discounts such as mobile were implemented. Line by line in our table, parity was restored, wasn’t it? Apparently yes, but unfortunately, not.

Prices are not compared horizontally but rather diagonally

Merchant, loyalty rates and special discounts make parity a real challenge. Even so, many hotels think they can still achieve it category by category horizontally: retail price vs. retail price, loyalty price vs. loyalty price, and so forth. Unfortunately, users and OTAs don’t behave as hotels expect them to do. This ideal parity table is very fragile and simply doesn’t work.

According to Booking.com, 2/3 or 66% of all its bookings happened in mobile in Q1 2022. Hotels should expect an even bigger share of mobile visits or users, assuming conversion is lower in mobile.  In the hotel direct channel, using our own data, we see that mobile traffic ranges from 55% to 70% and the number of bookings from 30% to 45% depending on the destination. This means that the share of mobile is 17 % higher in the OTAs. An explainable variance given the nature of the upper funnel where the OTAs are more used.

This uneven share of mobile makes that 25% of users are seeing the “desktop standard” rate in your website but the “special mobile rate” in the OTA. Our ideal and artificial horizontal parity schema breaks apart again.

The good news: two solutions to fix all this mess with different pros and cons

The first approach is also the simplest: withdrawing every program and promotion that imply a discount in the OTAs, also known as visibility boosters. That is, Rewards, Genius, mobile discounts, free upgrades, you name it. Ideally, you should avoid merchant model OTAs as you cannot prevent disparities from popping up in many places you don’t see. After leaving all OTAs loyalty programs, you should also create and implement your own. You can also play with “mobile discounts” exclusively for your direct channel, ensuring that your direct site becomes the most competitive channel, even when you have merchant OTAs undercutting you.

The second approach is totally different but also effective. It consists of keeping all visibility boosters in the OTAs but applying an initial markup at a channel manager level. This higher price to start will ensure that your direct website will be the most competitive channel even after all discounts are applied. Your direct price will always be the best alternative even in diagonal comparisons.

No matter what approach you choose, you’ll become the most competitive channel across the board. Mission accomplished. Congratulations. However, it’d be naïve to think that you can do that without decreasing sales through OTAs. Remember the battle between direct and OTAs is mostly a zero-sum game. The more you sell direct, the less you sell indirect. Consequently, your hotel will be less interesting for OTAs and will eventually lose visibility. Nothing to panic about though. It’s the obvious consequence. You’ll be better prepared, with more loyal repeat guests and a guest database to work with. Additionally, OTAs have substantially changed the way they manage their rankings. Billboard effects have largely been disproven. But that is a topic for another post.

Depending on the approach, you’ll have different advantages and disadvantages.

Inventory and rate parity is no longer a valid strategy. Parity sounds like a 90’s concept. It is the time to redefine a new relationship with the OTAs. A new strategy that allows you to grow your direct channel, reduce the dependency on OTAs, and make more money.

It will not be straightforward, but it is totally achievable. You just need patience, knowledge, marketing investment, and mostly a goal to achieve, an action plan and determination. Many hotels have done it already, so the path is proven.

Finally, a note about technology as it plays a critical role in helping you compete head-to-head with OTAs.  Choose the best solution, with the functionalities to replicate OTA tricks, and the one that adapts to your real needs. Commoditizing technology will leave a lot of money on the table.

Related Articles
Why Do Some Hotels Have 15%-40% Higher Revenue Than 2019?
The research below shows hotels that have consistently implemented revenue ...
Increase Website Conversions by 71.9%: Charlottehaven Hotel Case Study
The hotel was looking for a tactic to retain people on the hotel website, a...
How to Use Data Analytics to Improve Your Hotel Performance
Data analytics have all sorts of applications, among them is finding ways t...
Hotels Are You Ready? Only 2 Weeks Until Booking Shuts RateIntelligence
With just two weeks to go until Booking shuts down RateIntelligence forever...
Stay Out of Spam: Email Deliverability Guide for Hotel Marketers
What’s the point of executing your email marketing strategy if none of your...
Covid-19: Initiatives to Support Hotels and Communities
This is a slightly different podcast to normal as it will focus on two init...