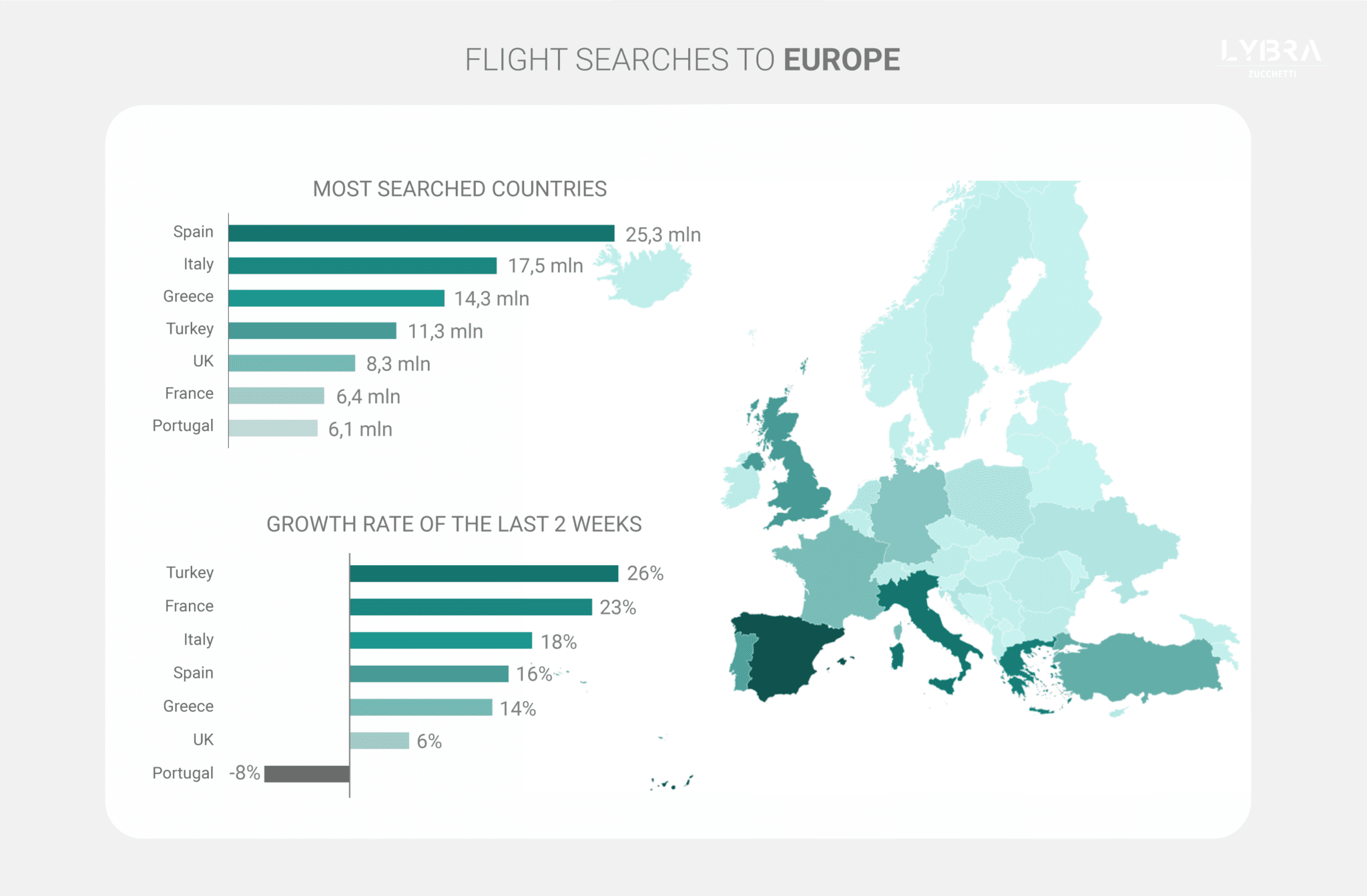 Travelers have a shown a growing interest in traveling to Europe, and flight searches in recent weeks have confirmed the trend; however, the growth rate has slowed compared to the previous month.

The trend was identified by an analysis of data from the first international metasearch of flights; the analysis of flight search data makes it possible to study trends in tourist demand, the travel preferences of travellers and identify which regions have the highest travel demand.

The number of flights searched in the last 30 days (May 27-June 26) has increased by 37% compared to the previous month, from 89.5 million to 122.5 million, supported by the opening policies of individual countries, the increased number of vaccinated people and the reduction of restrictions. Last month, Europe’s performance was particularly impressive, with a 62% increase over the same period last year and a daily growth rate of 2.5%. In recent weeks, the interest has diminished; today, the average daily growth rate has stabilized at 1%.

During the last 30 days, travelers have searched for an average of 4 million flights per day to European destinations, especially to Mediterranean countries; in fact, Spain, Italy, Greece and Turkey are the destinations for which there is the greatest interest and represent, alone, more than half of the searches (54.2%). 20.1% of tourists searched for flights to Spain, which remains the most popular destination for travellers with 25.3 million searches. Its market share has decreased slightly compared to the previous month, but not because searches have decreased; interest in other European countries are growing more strongly, resulting in the slight decrease of flight searches to Spain. After Spain, Italy has the second most flight searches, with 17.5 million searches, 48% more than the previous month. In third is Greece, with 14.3 million searches (a 43% growth rate) and, in fourth (but catching up quickly) is Turkey, with 11.3 million searches (a growth rate of 92%).

Together with Italy, Turkey has the highest growth rate out of the European destinations. During the last 30 days searches have increased at an average daily rate of 1.3% but, in fact, the country has been growing steadily for three months. Since April, interest in Turkey has been growing strongly, with travelers searching for an average of 185,000 flights per day; however, today, the average is 404,000 searches per day, with an average growth rate of 1.3%. Travelers are looking for flights mainly to Istanbul airport (of the total number of searches); with 3.56 million searches, it is the most searched airport. This is followed by Palma de Mallorca (3.56 million), Barcelona (3.40 million), Athens (3.07 million) and London (2.98 million).

There were 8.23 million searches to the UK in the last 30 days, only 9% more than the previous month. The average daily growth rate is just under the average, at +0.8%; while the rapid inoculations of the vaccine initially stimulated demand (especially outgoing demand), the traffic light system set up by the British government has blocked it, discouraging travelers from visiting. To date, only a handful of countries are included in the travel green list; all the others are subject to a minimum ten-day quarantine, which makes the idea of traveling to the UK more complicated for most travelers. In addition, with the spread of the Delta variant, the UK is no longer among the safe countries in Europe and many countries – such as Italy – are reintroducing mandatory quarantine for travelers. This trend shows the uncertainty of demand, which is now mainly domestic (35%) and is primarily looking for last-minute flights.

Related Articles
European Travel Unstable Due to Delta - Some Thriving & Others Collapsing
The travel industry has been affected both by fear of contagion of the Delt...
Three Quick Wins to Optimize Post-Pandemic Hotel Distribution
Central to a sustainable de-risked distribution strategy will be optimizing...
Podcast: Oaky and Staah talk Hyper Personalisation
We discuss the topic of Hyper Personalisation, how this extends personalisa...
Tools and Strategies for a Perfect Analysis of Competitors
This article is part 1 and looks at how to identify your competitive set a...
Desktop travel booking tipped for rapid drop, mobile becoming booking mainstay.
SITA has released the results of its latest Passenger IT Trends survey, sho...
Beonprice "Who are We?" - In conversation with Emilio Galán
Emilio introduces us to Beonprice, it’s solutions, their core differentiato...