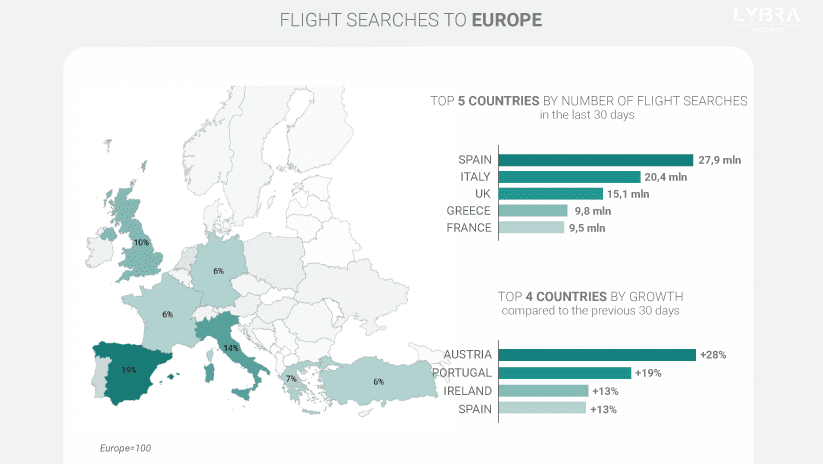 Travel Stalled: Greece and Turkey Lose Market Due to Seasonality

Europe’s travel sector has still not taken off, in the way that we had hoped: despite the introduction of the Green Pass and the easing of restrictions, the recovery of pre-COVID flows is still a long way away from our current reality.

The increase in demand during the summer season did give a boost to European tourism; however, the boost was cancelled out by the Delta variant outbreak, leaving the European travel market stagnant. Over the last thirty days, demand for flights to Europe has remained largely static, varying by only 2.1% compared to the same period last year.

Together with Spain and Italy, Greece and Turkey were the countries that contributed most to the recovery of European tourist demand. Greece was the forerunner in 2021 because of the government’s ambitious plans to relaunch the sector, organising tourist corridors in February and opening the borders to vaccinated tourists right away; with this plan, the country decided to take a risk to save a key sector of the country’s economy. Unfortunately, precisely because of this plan, the health situation in Greece worsened considerably in the middle of the summer season, resulting in it no longer being considered a safe destination for many European and non-European countries. As pictured in the following graph, searches for flights to Greece have plummeted and continue to decline steadily since the first weeks of July.

Turkey has also invested heavily in the recovery of tourism and, like Greece, decided to relax restrictions to entice travellers. For this reason, Turkey was also among the most desired destinations for tourists in April and demand was very high. Despite the worsening health situation in Turkey, the main cause of the collapse in demand was not COVID, but a series of devastating fires that destroyed Turkey’s most popular beach destinations. Turkish tourism is going through a very difficult period but, as you can see from the graph, since the beginning of September demand is starting to grow again.

Related Articles
The Human Factor Behind Revenue Automation
We know the need for digital transformation, but it is the human factor tha...
How to Use Facebook to Improve Your Hotel’s Digital Marketing
By connecting actions and conversions on your website to your Facebook inve...
How to Achieve Your Best Hotel Performance: Tips for 2021
The good news is that the data we read is showing concrete desire for trave...
Podcast: Total Revenue Management with Berner+Becker

Netflix - What Can Hoteliers Learn From The Megabrand’s Success?
Seemingly vastly different from each other, there might just be some proven...
How to Achieve Consistent Upsell Revenue and Happier Guests
The industry has recognized that the monetization of room upgrades, early c...