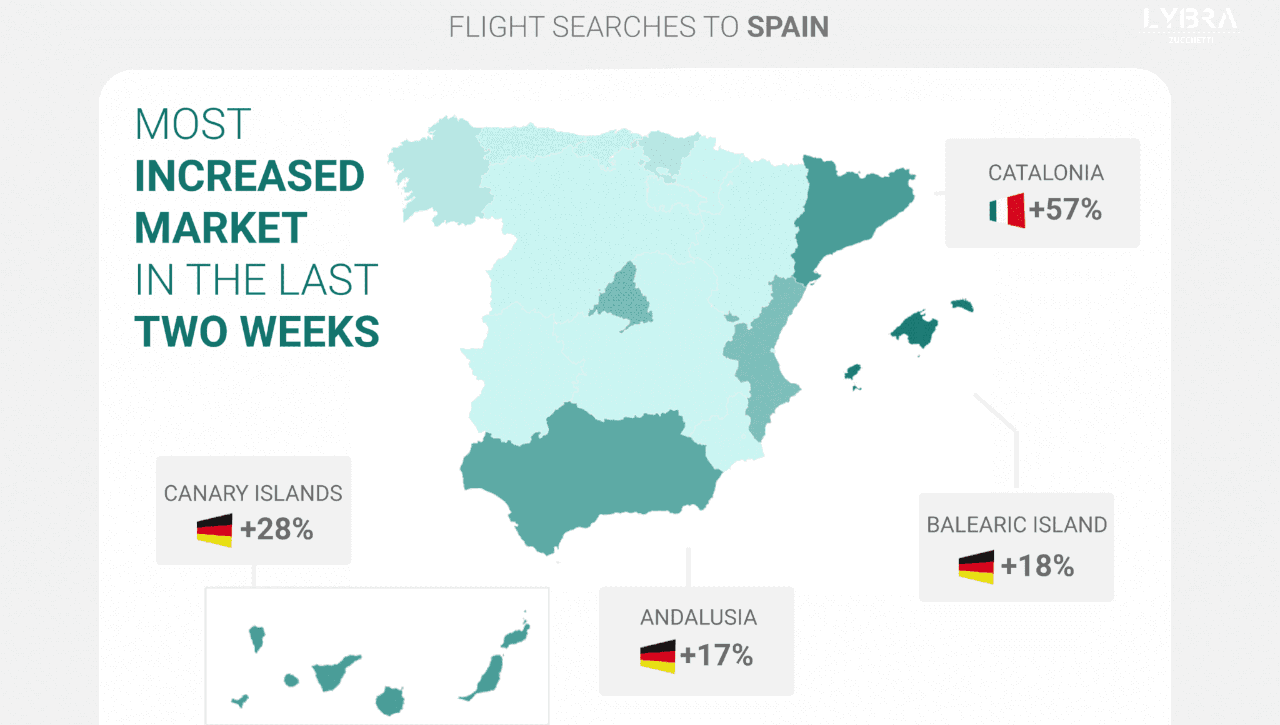 In the middle of the summer, Spain – like many other countries worldwide – was potentially facing a new wave of COVID-19 – a worsening of the ongoing health situation that had already endangered the first half of a difficult summer season.

As illustrated in the below graph, tourists have been searching for flights to Spain less and less frequently since the beginning of July; similarly, Greece also suffered a drop in the market in July, due to COVID-19, whereas, the tourist demand for Italian destinations remained fairly consistent.

In Spain, August brought good news: the demand pressure picked up, once again, and tourists have returned to the peninsula.

In August, which Spainish destinations were the most popular, based on flight searches made in the last 30 days? More importantly, which are the most active feeder markets for those destinations?

This data will help Spanish destinations determine how to update their revenue management and marketing strategy to reach travelers who are already expressing interest in traveling to their destination – resulting in an increase in market share, bookings and revenue for local hoteliers.

In terms of flight searches in the last 30 days, the Balearic archipelago ranks first among Spanish tourist destinations and it has been attracting mainly British, German, Italian and French tourists.

Travelers from the UK and Germany had a much larger market share, than other nationalities, but each country’s travelers have reacted very differently to the recent COVID outbreaks in Spain. Partly because of the stricter travel restrictions implemented, travelers from the UK had, repeatedly, abruptly stopped their travel research. It was not until the beginning of August, when travel searches to the Balearic Islands increased by 20%, that British travelers regained confidence in the safety of the destination. During the last two weeks, the interest in the Balearic Islands with UK travelers has diminished a bit, but it is still a growing market (+11%).

Germans, on the other hand, are very interested in travelling to the archipelago; it is currently the most active feeder market for the region, with a growth rate of 18% in the last two weeks, compared to the same period last year. German travelers’ interest in travel to the Balearic Islands has shown more regular growth, and tends to increase steadily from week-to-week.

British tourists are still most interested in visiting the Autonomous Community of Catalonia, but the most important feeder market has been is the Italian one: during the last two weeks, searches for flights have increased by 56.9% compared to the same previous period, with a dramatic peak in the last five days. According to the statistics, it seems that Italian travellers have regained confidence in Spanish destinations and Catalonia is the most popular destination. This market has seen significant signs of growth for many Spanish locations, but never more so, than in the Catalan region.

In Catalonia, the German market ranks third (in terms of the number of flights searched) and is also growing strongly, with a 23% increase in the last two weeks; other markets (i.e., France) are experiencing decreasing interest in travel to Catalonia.

The tourist market in the Canary Islands and Andalusia is very similar to that of the Balearic Islands, with one major difference: the share of British tourists is much higher than German travelers, as they outnumber all other nationalities; however, as in the Balearic Islands, the UK market is still very inconsistent, with periods of growth and sudden stops in flight searches to the Canary Islands and Andalusia.

Once again, the German market is much more stable and demand pressure has been steadily increasing over the last 30 days; in particular, searches for the Canary Islands have increased 28% in the last two weeks, compared to the same period last year, and have grown at an average daily rate of 3.7%. In Andalusia, flight searches in the past two weeks have increased by only 17%, at an average daily growth rate of 2%.

Related Articles
Restoring Your ADR Post Crisis
Re-building of ADR is much more correlated to the restoration of demand in ...
How a Detailed Hotel Marketing Audit Helps Determine Budget
Before you decide on marketing expenses for 2022, take a step back and see ...
Hotel Benchmarking: Insider Tips to Kickstart Your Journey
It is worthwhile to look beyond the traditional idea of a compset when benc...
Simple Ideas and Steps to Improve your Direct Booking (Part 2)
We look at what happens when a booker visits your website, the biggest mist...
Delta Variant Stops European Tourism, Leaving Coastal Destinations Crisis
Once again, Europe is locked in new restrictions because of the spread of t...
Hotels Need to Guard Against Aggressive Country Rates Campaigns
OTAs choose which POS to show and will ensure the rates do not appear on th...