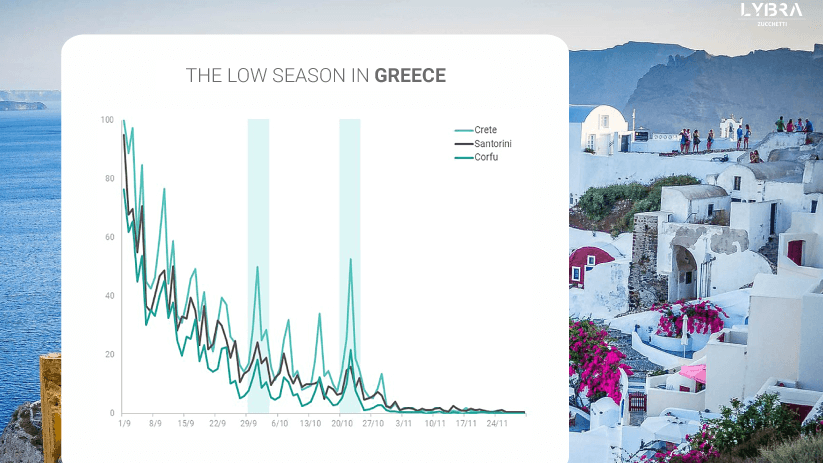 Tourism in Greece: Time to Think About the Low Season

The summer season of 2022 will perhaps be the closest to a normal situation in the world of tourism and, after two years of restrictions, tourist destinations are trying to better organize the upcoming months.

The market has in fact been deeply shaken by events and if there’s something we’ve have learned it is that the pandemic has had a substantial impact that has changed, at least in part, tourism and tourists.

We are still in a recovery phase, but it is now clear that there has been a shift from the pre-Covid status; a shift that is increasingly distancing that static way of doing things, of “waiting” for the tourist to knock on the door, in favor of intelligent tourism, which looks towards the future and focuses on planning of the next steps.

Today one cannot afford to be late: the summer season, now at the gate, has (or rather, should have) already the players deployed on the field ready to go, and it’s already time to schedule the low season. Yes, because while operators are concentrating on filling up accommodation facilities for the summer, tourists are already planning their holidays for the autumn. Demand for the low season is, in fact, already building up now, almost six months in advance. According to flight research data, demand for low-season flights in Greece began to form as early as the end of February, before growing significantly in March.

The question is: are we ready to change with the tourists (and with the market)?

For the Island of Crete, the low season going from September to November, was (and still is) a very important tourist period, amounting for about one third of the annual tourists turnover. In 2019, for example, 28% of passengers travelling to Crete chose to travel at this time of year, preferring to schedule their holidays in the month of September (16%).

During the last thirty days (26 March-25 April), travel intentions have grown at an average daily rate of 1.6%. As it is easy to guess from the graph, September is still the month which is most desired by tourists. Demand remains very strong until the first ten days of the month, before starting to decrease. Worthy of mention ar two demand peaks during October. These peaks lengthen seasonality of the island and make october an active month for tourism: during the 30 last days tourists are in fact looking for flights to Crete for October Saturdays 1 and 22.

Tourists interested to visit Crete during low season are mainly English, representing 28.4% of the total. Germans rank second (21.9%), and at a notable distance follow the Greeks (7.8%), the Italians (7.0%) and the French (3.1%). More in particular, the British are interested in travelling to Crete especially in the first ten days of September and are also strongly interested in the flights of October 22. Germans are also particularly interested in this date, as they are for all weekends of October, while their demand for September and November is low.

The low season in Santorini was registering good results before Covid, especially during the month of October, during which the number of passengers that landed on the island increased by 12% compared to 2018. With the pandemic, this growth has obviously been halted and passengers in the September-November quarter decreased by 68% in 2020.

The data for 2022 is positive, but not particularly encouraging: looking at the research trend of the last thirty days, we see that travel intentions for Santorini are growing at an average daily rate of 2.0%. However, periods during which stays are concentrated are very short. Considering departure dates, demand is all crushed in the first week of September and then drops rapidly already during the second week of the month. Research quantity in October and November is very low and there is only an increase in demand for October 22-23.

The most active market is, also in this case, the English one, with 26.2% of searches and is followed by the Italian market (20.1%). After the Greeks (12.5%) and the French (10.0%), there are the Spanish (7.7%). In this case, Germans have a relatively low market share, which is certainly lower than the other destinations analyzed here. All markets show a similar trend, gradually decreasing demand already during the first weeks of September. Worthy of mention is a demand peak from the British for October 22 and an increase in searches fron the Spanish for flights of September 4-5.

According to Eurostat, in the low season of 2019 796 thousand travellers landed in Corfu: again, this period has an important weight on tourism of the island, since it represents 27% of the total annual. September is the preferred month and in 2019 it attracted about 530 thousand tourists: it must be said that the month of September is the only one that recorded a growth compared to 2018 (+10%).

Even in 2022 there is this strong preference: most of the searches recorded in the last thirty days are for September; in particular, for the first two weeks. Stays are not particularly concentrated, but it is nevertheless clear that, at least for the time being, tourists are not looking for flights for the long term. As for other destinations, there is a demand peak for October 22.

This peak of searches comes directly from the English market, which is the main one for the island of Corfu: according to research data, 42% of the users who are searching for flights come from the United Kingdom. Moreover, the British are strongly interested in the first weeks of September, and are showing a relatively stable demand (albeit decreasing) until the 17th of the month.

The second most active market, far behind the first, is the German one, with a total share of 14%. Germans’ searches focus on flights departing on weekends, specifically on September 3. Unlike other nationalities, Germans are more interested in the month of October, especially the weekends of October 1 and 15.

The low season in Mykonos was growing well: according to Eurostat data, passengers disembarked in September 2019 were 10% more than the previous year, while those disembarked in October grew by +28%. The pandemic has, inevitably, stopped this positive trend, causing a -64% of arrivals in 2020.

But today is another day and flight searches seem to be heading towards a rapid recovery in pre-Covid flows. According to search data, demand for low-season flights is increasing at an average daily rate of +2%, an increase recorded especially in the last weeks of April.

It must be said, however, that stays are quite concentrated in a short period: the demand for flights to Mykonos, which also tracks flights with a stopover, decreases sharply after the first days of September. Although its weather and climate are good, the month of September does not appeal to tourists. Among them, only Italians and English would be interested in traveling even during the middle of the month, with peaks on September 9, 17 and 24. Italians (30% of the total) and English (22%) are the two reference markets for the low season in Mykonos, followed by Germans (9%) and Greeks (7%).

Among the destinations examined today, Rhodes and Crete were the destinations with the highest volumes of air passengers. In September-November 2019, for example, passengers disembarked in Rhodes were 1.44 million while there were 2.04 million in Crete.

Today, however, in our ranking, Rhodes has dropped from second to fifth (and last) place among the most sought after destinations. We are undoubtedly talking about different values that could hardly be compared: on the one hand we have historical data of passengers who made the trip; on the other hand we are talking about travel intentions and therefore of what travelers want and their future travel intentions. Despite the two different perspectives, it is undoubtedly unexpected to discover from available data that travel intentions for Rhodes are, by volume, lower than those for Mykonos and about half those for Crete.

However, data also shows that only Rhodes and Crete have a more consistent low season window of stays: unlike other destinations, demand decline for low season flights does not start from the first days of September. Demand remains relatively stable throughout September, just as in October, and, despite a concentration trend on weekends, during this period there seems to be a good demand for travel. The market is strongly concentrated on the British, who represent 44% of the total, followed by Germans (17%) and Italians (8%). The first two generate are the ones generating a lengthening of the season: the British are concentrating mainly on the month of September while the Germans prefer, as of now, the weekends of October; especially the first one.

Related Articles
Crisis Recovery Shape, Strategy Considerations and Revenue Forecasting
We talk with Dan Skodol of Cendyn about post crisis recovery shapes, scenar...
How To Drive Revenue Through Hotel Package Deals
Travelers are willing to spend up to 30% more than the average daily room r...
SEO vs SEM: What's the Difference and How Can Both Benefit Your Hotel
SEO and SEM are two of the most common abbreviations in the acronym soup of...
Hotstats Hotels Performance: MENA, Europe, UK and US (March 2018)
MIDDLE EAST & AFRICA Hotels in the Middle East & Africa successful...
Canvas: the intelligent website creator for independent hotels
SiteMinder, the leading cloud platform for hotels, is pleased today to un...
5 Tips to Leverage Guest Reviews on Your Hotel Website
With the majority of travelers looking for reassurance, there is a signific...