Why the hotel industry isn’t afraid of Airbnb (yet)

But that doesn’t mean hotels are scared of the new kid on the block. New research from Morgan Stanley shows the hotel industry remains healthy, buoyed by strong growth in revenue per available room and occupancy rates, two of the industry’s most important metrics. In outlining some of the challenges ahead for Airbnb, the firm also laid out a few reasons why hotels are unlikely to see a major impact in their businesses in the near future.

Occupancy rates are considered an indicator for hotels’ market performance. Historically, hotel stocks have fallen 12 to 15 months after occupancy has peaked, according to the report. The firm estimates the earliest that’ll happen will be 12 to 18 months from now. In the US, where the rates are lower than other developed markets, it has a slightly longer runway, about two years. Even then, it’ll take at least another year before their stocks show any decline, which should provide extra cushion against shareholder demands and concerns over Airbnb.

Airbnb often says that it does more than help people find houses to rent. Instead, it emphasizes the notion of sharing homes, aiming to foster a sense of belonging and community—things that aren’t necessarily important to people traveling on a company’s dime. 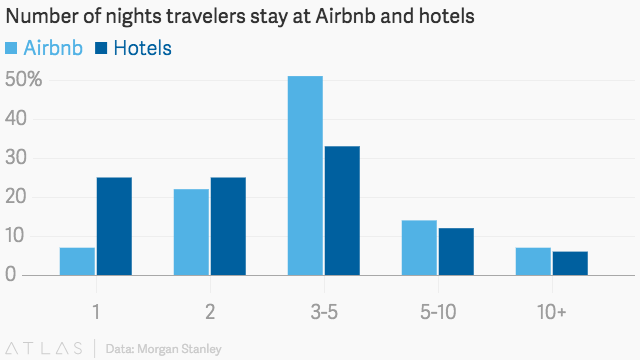 After surveying 4,000 travelers, Morgan Stanley found only 7% of Airbnb users booked one-night stays. In contrast, overnight guests make up 25% of hotels’ business. That’s not to say people aren’t choosing Airbnb over traditional accommodations, but it suggests corporate travelers—who are more likely to book just one night—are sticking to hotels, says the firm.

Related Articles
Mr. Hotelier, Four Signs It is Time to Change your Distribution Partner
While technology, customer profiles and buying habits have changed dramatic...
Putting the Brakes on Spanish Travel: The Ups, Downs & EU Controversy
Recently, Spain has lost about twenty thousand searches per day. Travelers ...
Falling In Love: The Hotel Love Match
Let’s face it hotel technology isn’t a supporting player in the guest exper...
How to Maintain or Increase Your Direct Sales Quota Post Pandemic
Ensuring your direct sales maintain their quota is in your hands. If you wa...
Key Factors to Calculate Demand Forecasting
When projecting a point in time in the future and trying to anticipate dema...
Reflections from 2020: The Rise of Automated Pricing
While data is the oxygen that is going to fuel better pricing decisions the...