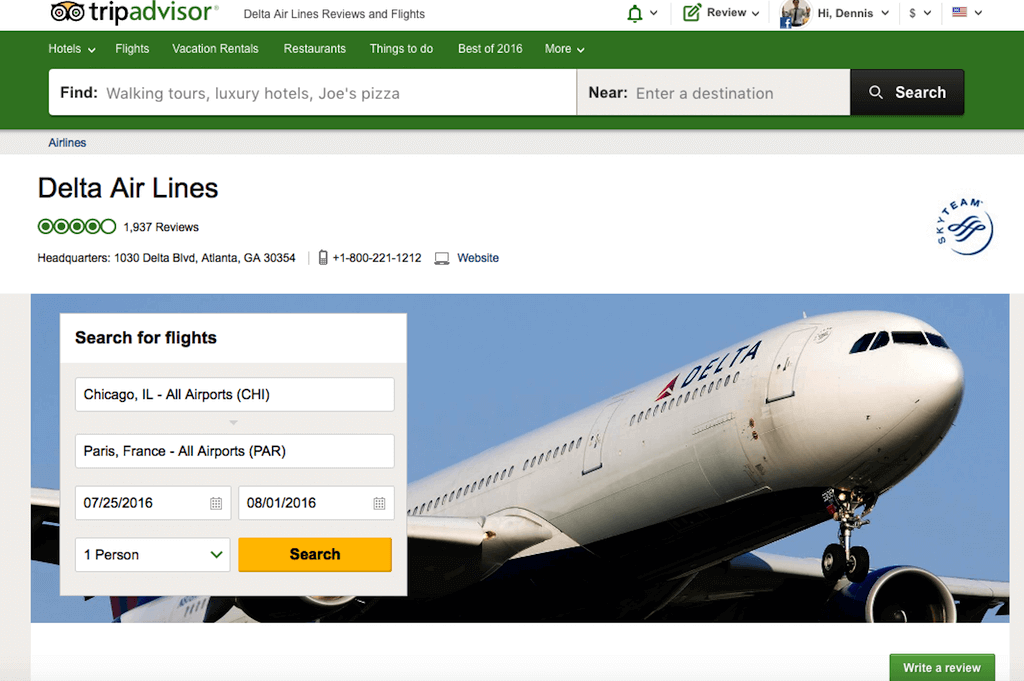 Seven years ago, TripAdvisor first launched its metasearch flight tool, and it wasn’t long after until it enabled users to post reviews.

In 2014, it updated the look of TripAdvisor Flights by adding detailed amenity information, filled at first by SeatGuru, a socially-powered flight amenities site that it acquired in 2007.

Today TripAdvisor launches what it calls a new reviews platform, live in more than 40 countries and in 29 languages.

You might think of it as a funnel: Travelers can review any airline they’ve flown.

A subset of these airlines have already registered as owners in TripAdvisor’s free management center, allowing them to respond to consumer reviews and opinions. (Once an airline brands signs up, it is able to share photo content and respond to reviews, similar to what hotel brands can do.)

Flight reviews collected by carriers or online travel agencies are identified as such on TripAdvisor.

Airlines reluctant to participate because they assume that TripAdvisor will be a complaint channel may want to think again. Perhaps surprisingly, airlines receive an average rating of 3.7 out of 5, a hair shy of the average rating that hotels receive.

“There’s an identifiable profile for TripAdvisor reviewers. Our people are highly engaged and community-focused. They want to pay it forward. It’s not a discussion back and forth to allow other people to comment, like you see on Facebook and Twitter. Our proposition is just different, and our conversations about flights are, on balance, more positive.”

Related Articles
7 Hotel Commercial Mistakes and What To Do About Them
7 key findings, let us call them ‘Commercial Mistakes’ the property was mak...
3 Strategies to Differentiate Your Hotel From Your Competitors
Faced with constant uncertainty in the international hotel market, we must ...
Why an RMS Will Never Replace Human Revenue Managers
Just as search engines evolved thanks to software engineers, the prediction...
Trivago Improves CPA With Cancellations Taken Into Account (Net CPA)
trivago is transforming its Gross CPA model to a Net CPA model for independ...
The Most Important KPIs for Hotels in 2021
When we look at isolated metrics and KPIs, we are only looking at one piece...
Three Quick Wins to Optimize Post-Pandemic Hotel Distribution
Central to a sustainable de-risked distribution strategy will be optimizing...