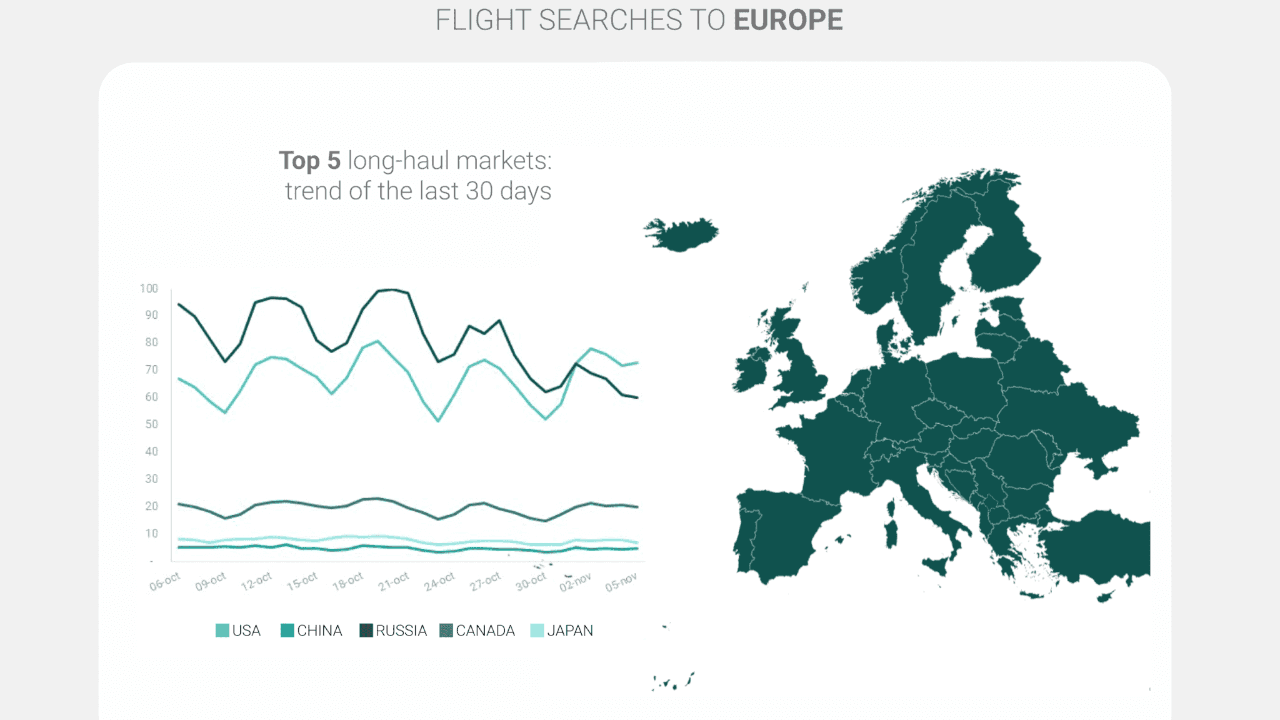 Whether destinations, intermediaries, hoteliers or local operators, the common desire of the European travel industry is the return of long-haul tourists, and the subsequent return to financial prosperity.

This seems to be the last glimmer of a real recovery in the sector, but despite a general reduction in restrictions, the results (in terms of long-haul flight searches) do not seem very promising. As such, it is worth analysing travellers’ intentions and looking for the real obstacles to recovery, to determine why interest in long-haul travel hasn’t returned.

The re-opening of the United States has been a very lively topic of discussion in recent weeks, not only because of the great weight that American travellers have on the tourist economy of many destinations, but also because the numerous changes to the restrictions gave Europeans hope for a positive outcome.

Unfortunately, the hope of a complete reopening between the United States and Europe is fading; while the United States has officially opened its borders to vaccinated travellers, European countries have reintroduced travel bans in recent weeks. Currently, out of 31 European countries, only four allow Americans to travel freely; others are open only to vaccinated people (12 countries) or impose a quarantine (11 countries), while some are totally closed (4 countries).

Not surprisingly, the US market is essentially stagnant: according to the European Travel Commission’s survey, Americans would like to travel to European destinations again but are discouraged by the constant changes. Looking at flight searches, the growth trend of the last thirty days stops at +0.8% and remains low even for the most popular destinations: UK (+1.1%), Spain (+1.1%) and Italy (+0.9%).

The closure policy implemented by the Chinese government in 2020, which discouraged foreign travel for residents, has strongly conditioned the choices of Chinese tourists. The Chinese market has shrunk dramatically and, although the number of Chinese tourists who traveled to Europe increased during the summer months, there does not seem to be a substantial change to come.

Searches for flights to Europe have stalled: the growth rate over the last thirty days is +0.6% and +0.7% in the last 60 days. According to the ETC, Chinese tourists do want to return to Europe, but the limits imposed on entry that are off-putting: at present, the two Chinese vaccines have not yet been recognised by the EMA and only a few countries have decided to distance themselves from this decision.

The good news… Even if the EMA does not recognise the efficacy of a vaccine, European countries can decide for themselves whether to approve vaccines on the emergency list; however, Chinese vaccines are only currently recognised by 10 countries in Europe (Austria, Cyprus, Greece, Hungary, Iceland; Malta, Spain, Sweden, Finland and the Netherlands). So, if you are waiting for the return of Chinese tourists, know that there is a basic obstacle that is controlling the recovery of the market.

Russia is experiencing a very similar situation. Sputnik V is also one of the vaccines that are not recognised by the EMA; to date, the European Agency has stated that the process for its recognition has been postponed until the first quarter of 2022.

From the graph above, however, it seems that the Russian market is performing well since it is in first place for number of searches: in fact, the majority of travel intentions (about 40%) are for Turkey, a country that has decided to allow the entry of tourists with any Russian vaccine. In addition, based on flight searches, it emerges that Russians are diverting their desire to travel only to destinations that approve Sputnik: besides Turkey, demand is directed towards Hungary, Armenia, Cyprus and Greece.

Canada’s travel market to Europe is completely stagnant: searches for flights to European destinations account for only 21% of the total and have only grown by 0.3% over the past thirty days. These results are disappointing especially considering that a few weeks ago, the Canadian government removed its global travel warning on all non-essential travel outside the country. The move apparently did not stimulate travel intentions to Europe, which instead increased to the US and Mexico.

In the case of Japan, however, the share of flight searches to European destinations has dropped to 9% and the trend has stalled at +0.2%. The main obstacle is linked to the restrictions of the European Union, which has not included Japan in the Whitelist of low-risk countries; even so, some countries – such as France and Germany – have decided to welcome Japanese travellers (albeit with precautions), but demand is still very low and not very active.

Related Articles
RFP Season Almost Upon Us: What Threats to Our Corporate Business?
The traditional RFP season is almost upon us and whilst contracting can hap...
8 Tips to Reduce Last Minute Hotel Cancellations and No Shows
Things come up. Circumstances change. Plans get disrupted. But is that the...
How Experiential Marketing can Transform the User Experience
Experiential marketing is becoming a large player in allowing the consumer ...
Our Point of View on the Modern Age Distribution Ecosystem
Today the realm of an effective distribution strategy exceeds beyond distri...
Considerations When Setting Your Room Upgrade Pricing
So why would hoteliers set a narrow range? With no previous experience in y...
Revenue Management - Why Automation Rocks
I write this article as the founder of revenue management system, Right Rev...