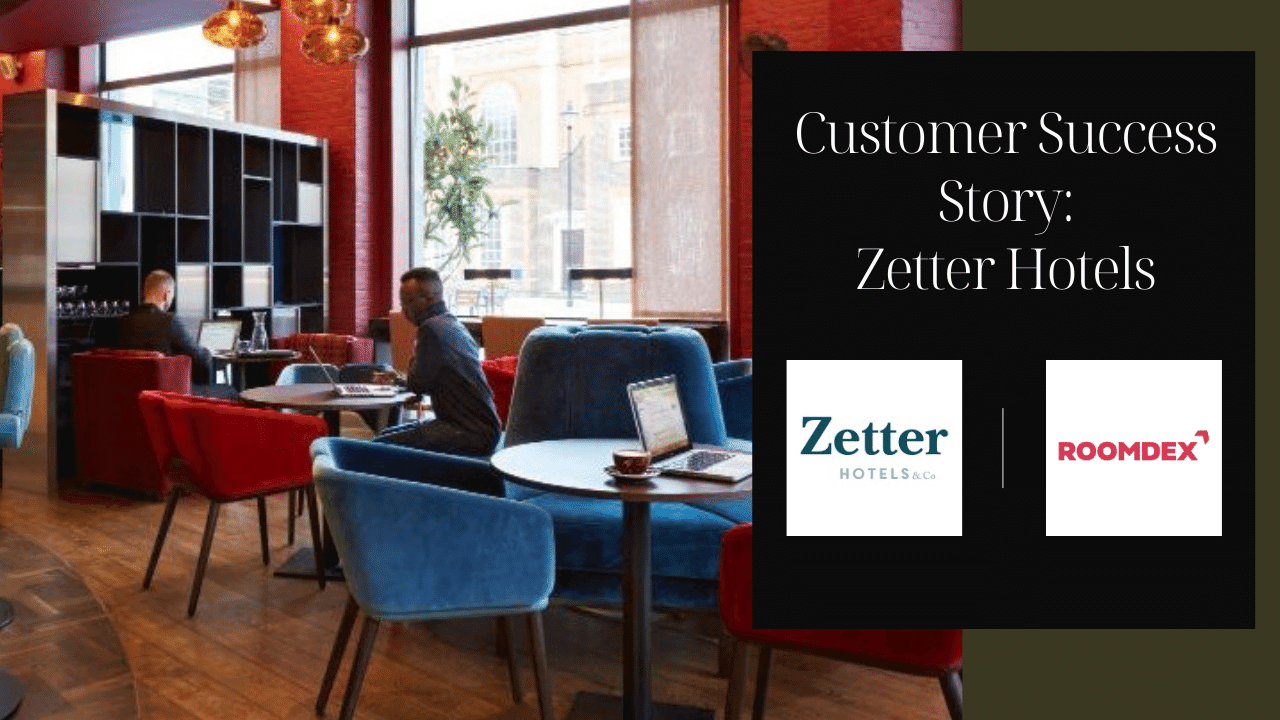 Last year, in 2021, the Zetter Group acquired by Orca Holding and, in the process, underwent a complete revamp of their tech stack.

NB: This is an article from Roomdex, one of our Expert Partners

Having recently added ROOMDEX as part of their tech overhaul, we caught up with Arnold Linares, Group Revenue Distribution Manager for The Zetter Hotels to find out why Zetter chose ROOMDEX, how the integration works with the PMS, and how it has been performing.

The Zetter Group is a dynamic company, comprised of award-winning hotels, restaurants and bars, all with distinct personalities, wit & style. Based in London, their properties include The Zetter Hotel, opened in 2004 and cited as London’s first boutique hotel to be designed and built using environmental principles. This was followed by The Zetter Townhouse Clerkenwell in 2011, and the Zetter Townhouse in Marylebone in 2015.

Tell us a little bit about when you heard about ROOMDEX and the decision to move forward with ROOMDEX. How did that decision-making process happen?

I joined the company a year ago and at the time Zetter Hotels was going through a revamp of the tech stack – we changed every single system. Apaleo had already been agreed upon as the new PMS. Once it was set up and in place, one of the biggest questions we had was, “How can we adjust our toolset to optimise our upselling program?” Whatever provider we were going to choose, we knew we wanted something that would be able to fully integrate with our PMS.

Before I was approached by ROOMDEX, I was actively engaging with other vendors that had been around for a while but to our surprise, it was ROOMDEX that provided the deepest integration to the Apaleo platform. When ROOMDEX revealed they had a two-way interface into Apaleo, I was really keen to trial it.

Naturally, I bombarded ROOMDEX with questions like, “How exactly is this going to work? How is it going to bounce back to our system?” But my questions were quickly answered. With ROOMDEX, everything bounces back into the PMS, no matter what time it is, no matter what day of the week it is. Having set the parameters and letting the ROOMDEX algorithm provide dynamic pricing – I must say I was very happy to see that we could just seamlessly give customers the option of improving their stay.

Our three properties feature many unique elements per room, so being able to provide that differentiation in our upselling meant it was a perfect choice for us. We have a lot of repeat guests, so people are aware that, at peak times, a junior suite might be a big chunk of money. But, those customers are now upgrading to a suite in the upsell process, something they would not have considered at the initial reservation. We see this regularly. They’re definitely going for it.

I must say I’m very pleased to see that something that I’ve always thought should be simple – an integration with our PMS – actually turned out to be simple! We got ROOMDEX up and live within the space of, literally, a few hours. The return on investment you get without having to use your revenue management team’s resources is just a win-win situation for us.

Let’s talk about the two-way integration. One of the things that we’re encountering in the industry is that a lot of revenue managers think that they have an upselling tool when in fact what they have is really an upsell request system. It turns out these upgrade request systems just add more work to their days. Is this something you noticed when you worked with other upsell systems?

In all the previous companies, especially at K&K hotels, before Yotel, when I was in charge, we were looking to trial an upsell tool – even five years ago. We wanted an upselling tool to make extra revenue. And the realization back then was, it was so much manual work for me and the team to be approving every single request and checking if we had the space to upsell.

And sometimes, especially on the weekends, you get all the requests from Saturday and Sunday – a lot of the time we were not working those times. So, when you came in on Monday, the hotel might have already sold out those rooms at some point and so the upsell request didn’t materialize – because it might be 36 hours later or 48 or 72 hours, a whole three days later and you finally decide to approve, or not, the upsell but by which time the room might be available anyway.  It really bugged me that you could not really, if I have it available, just sell it now – give it to the customer. If you need to wait like three days later for it, the chances are you’re not really going to secure that upsell.

For me, I was always asking, what is it that is missing? Is it our PMS that doesn’t support it? Is it our channel manager not supporting it? Or is it the tool itself that wasn’t quite developed at the time? I really wanted to make sure I didn’t waste my team’s time or annoy our customers. When you have to say “oh we’re very sorry, we can’t fulfill your request,” you’re disappointing your guest before they’ve even arrived. And what does that say about us, as a product and as a destination to them, that you’re promising them something that doesn’t materialize.

Now having the two-way interface between ROOMDEX and Apaleo makes the difference. I have approached many ROOMDEX competitors, and none of them are able to support a two-way interface. They all keep saying “it’ll come eventually…” But it doesn’t make sense to sign up for something that then creates more work for my team. That’s a deal breaker. ROOMDEX was the only one that had that two-way interface with Apaleo and so was the perfect solution.

I think people who go with a different platform are just over-complicating their work lives while potentially upsetting their customers. The guest experience is being diluted by the wrong choice in upselling tool.

How long did it take to set up ROOMDEX for your hotels?

To our surprise, setting up the integration literally took minutes. Then, for my part, configuring three properties was less than an hour. And then, I believe by the next day, the first emails were already going out. When I think about it, we probably spent more time analyzing the market, trying to find a provider, than actually really setting it up. The set-up was really, absolutely simple. It took nothing. It’s like zero effort.

How often have you gone back, or have you had to go back and adjust the yielding?

We launched it nearly three months ago, and I only had to do an adjustment once. It was at the beginning, and it was because one of our properties is so small that we only have one junior suite and one suite available at that property. I just had to tweak those room categories to make sure that the price range was a bit increased to justify selling it in advance. And that’s it so far since that day, I have not touched any of the settings.

Did you make any adjustments to your PMS data to enhance your offers through ROOMDEX?

No. A key issue that you find in the industry is often the data is not clean, you don’t know where everything flows. I have dealt with PMSs for quite a while and I like to get the data simple, clean, and straightforward. So, for us, when it came to working with ROOMDEX and Apaleo, there was nothing else I had to do in the PMS. From my side, I only had to, pretty much, tell ROOMDEX exactly what it is that we wanted to sell or what we could sell at that time. And that was it.

Are you selling early check-ins and late check-outs through ROOMDEX?

Yes, but we only have a two-hour slot extra for early arrival or late departure, which ensures that operations teams do not struggle. But there is a fair portion of people requesting a later checkout if they are flying in the afternoon on day of departure.

To finish up, let’s talk about performance and return on investment. Are you getting what you expected? And has performance been consistent?

I’ll be honest, we are getting more than I thought we were going to be getting. We weren’t quite so sure if our guests would be open to upgrade offers. But we have seen major results. It’s pretty much double what I was expecting. The Return On Investment is perfect. It’s definitely what you would like to have. The cost and the effort for you to set up or maintain, it is minimum, absolutely minimum. It’s purely added revenue for us. It works for us.

I would really suggest to people that, especially those that use Apaleo, really consider just giving ROOMDEX a try. Especially because they offer free trials to prove that what they are providing is actually a correct product. People should just give it a go. They will find that by using the platform, it will give you extra additional revenue and you pretty much have a minimum effort in terms of manual management of the process.

Related Articles
Booking.com Introduces “Native Ads”
This is probably the most interesting part, as native ads are mostly intend...
The Super Revenue Management Challenge of the Super Bowl

Navigating the Pandemic and Recovery with Innovative Hotel Tech
Hotel tech has developed leaps and bounds. From a wider choice in PMSs and ...
The New Relationship Between Upselling Cadence and Guest Engagement
When driven by upselling, digital guest engagement can strengthen loyalty, ...
Plotting (literally) the Hotel Comeback post COVID
It’s been interesting to monitor the extent to which hotel reopenings have ...
Has the Role of the Revenue Manager Really Evolved?
In today's video we are joined by Adrienne Hanna, Founder of Right Revenue...