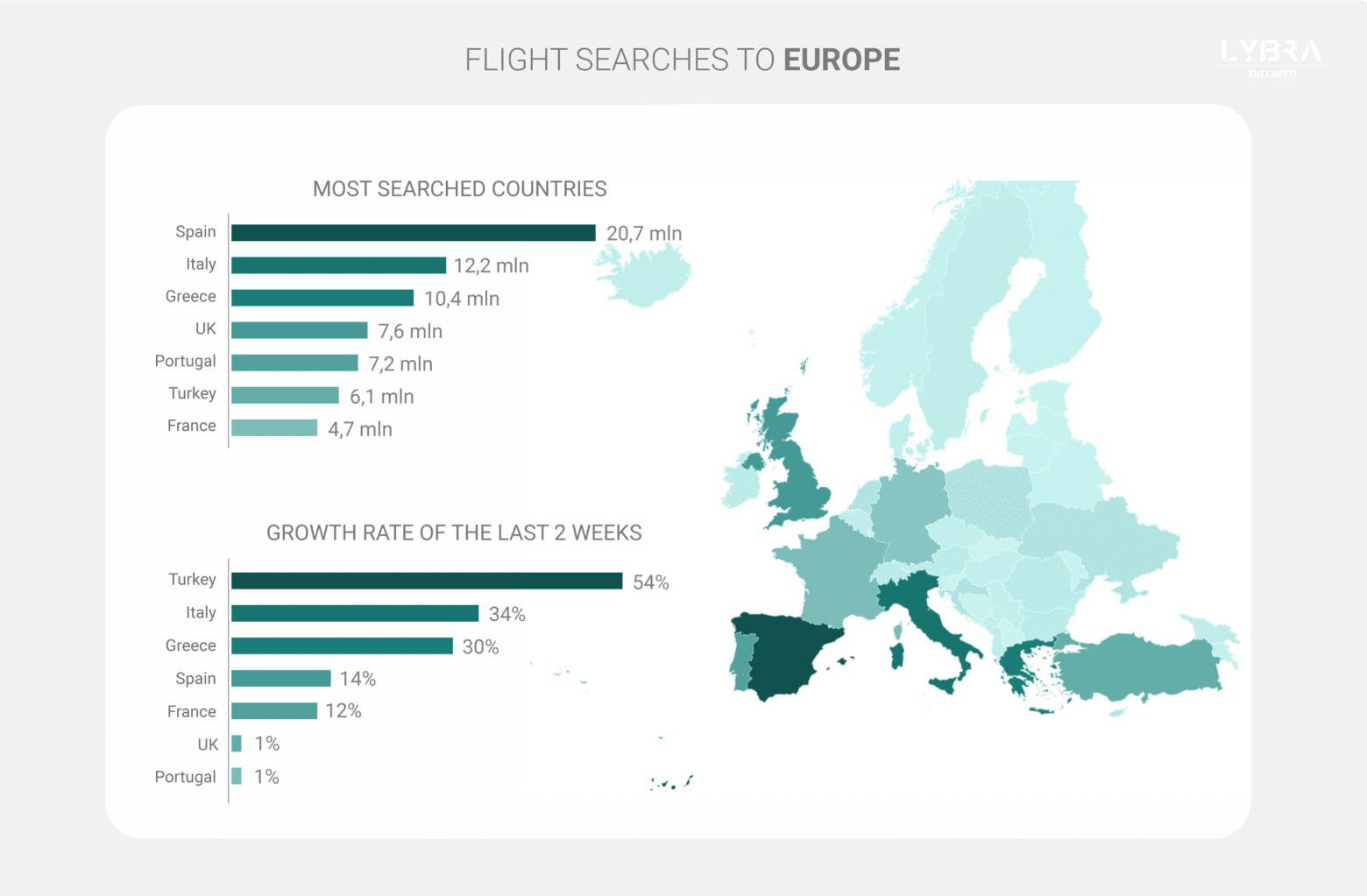 The European Travel Market is Finally Open for Business

Thanks to a general improvement in the health situation, Europe can – albeit, with due caution – begin speaking about a recovery of the travel industry in the region: thanks to the slowdown in infections and the spread of vaccines, European countries are loosening travel restrictions and reopening their borders.

In the world of travel, this recovery has been very evident: of the 180 million searches made worldwide in the last thirty days (April 29-May 29), 105 million were for flights to Europe. More than half of the searches (58.3%) were for the Old Continent, with the remaining 41.7% divided between North America (15.7%) and the remaining geographical areas (26%).

Today, Europe is the star of the travel world, not only for its market share but also for the important growth recorded; while in the rest of the world, the rate of change in the last thirty days is 13.7%, for Europe it is 54.6%, rising from 68.1 million to 105.2 million searches. This increase in interest is certainly linked to the improved health situation, the easing of restrictive policies in individual countries, and EU and national policies designed to stimulate the tourism sector; moreover, thanks to the rapid spread of vaccines, Europe has seen a sharp drop in the number of infections in recent weeks, the biggest drop of any region.

But this performance is as surprising as it is precarious; the vaccination rates in many countries (especially those with a high level of tourism) are still not high enough and the risk of new variants appearing is always a possibility. As such, national crisis management bodies are strongly urging caution, even in the face of a revival of local economies.

The countries that have contributed most to this surprising growth are those of the southern belt, also thanks to the imminent opening of the summer season. In fact, it could be said that Europe’s growth is due to just three countries, since 54.4% of the flight searches are attributable to the performance of Spain, Italy and Greece – a share that reaches 72.1% with Portugal and France added. To a lesser extent, but still with excellent results, Germany and Turkey are also among the countries with the highest growth.

Spain is the European destination most searched by travellers from all over the world; with 20.7 million searches, it represents 19.7% of the total European searches. In fact, the peninsula has maintained this position for many months, most likely because the decision was made in the Spring to reopen tourism to the archipelagos of the Canary and Balearic Islands. Spain will probably maintain this position, considering that it was the first nation to implement a strong reduction in restrictions, but in recent weeks it has slowed its growth, which is currently +1.0% on average per day.

Italy, on the other hand, seems to have finally started on the road to recovery and, after experiencing the minimal activity during the Spring, has seen a strong increase in the interest of travelers. Searches have more than doubled during the last thirty days, from 6.3 million to 12.3 million flights searched, while the growth variation of the last two weeks is 33.9%. Also in this case, the reduction of restrictions and national programs designed to restart tourism have positively impacted the increase in searches: today, Italy is the second most searched destination in Europe, with a market share of 11.6%.

In third place among travelers’ choices is Greece, a country that is under special observation by the tourism world, since it was the forerunner of the sector’s recovery plans. Greece was the first to organise a tourist corridor in February this year, and the first to plan vaccinations to restart tourism, by creating COVID-free islands. Today Greece is open to tourists (those vaccinated or with a negative test) anticipating, along with Croatia and Cyprus, the European Union which has not yet issued its Green Pass.

In the last thirty days, 10.3 million flights have been searched, which is more than twice as many as in the same period last year (+103.9%); the variation in growth, over the last two weeks, is 30.1%.

Destination is a market intelligence project created by Lybra – developers of the most complete, machine learning, data-centric Revenue Management System (RMS) available on the market – to share real-time, region-specific statistics, information and trends in the world of tourism.

Every day, Lybra analyzes millions of datasets – data collected from thousands of hotels’ PMS and flight search data from a leading metasearch booking engine – to help hoteliers “look ahead to better understand the present;” in other words, Lybra helps hoteliers understand the upcoming demand for their destination and gives them the revenue management tools and actionable insights necessary, to maximize bookings and revenue.

The aim of Destination is to give hoteliers and DMOs a more expansive view of tourism news and trends in different regions around the world. Destination produces weekly Travel Demand Reports, which share tourism developments for a specific country/region and analyze how the region’s travel news has impacted tourist demand.

Related Articles
Who Should be Responsible for Your Hotel Social Media
Hoteliers are short staffed and often social media is a last priority. If w...
Is Your Hotel Website Recession Proof?
In a recession, one of the first line items to get cut is the media budget,...
Road to Reopening the UK: Will it be a Green Light for the Travel Industry?
While waiting for the start of the third phase of easing restrictions, whic...
Should ‘open pricing’ negate traditional contracted rates?
RFP season may have passed, but it won’t be too long before it descends on ...
Five Experiences that Build the Revenue Manager Résumé
The traditional career path for most Revenue Managers is to start in Reserv...
PMS: Does Your Hotel's Heart Need a Bypass? [Event Replay]
Is the PMS truly the “heart” of the tech stack? Or is it the CRS/RMS; we kn...