For users of Google’s Premium Analytics services, you may have noticed a slight change in the way that default metrics are being displayed. Google has removed the % New Sessions, added in Number of Sessions per User and New Users. They have also re-ordered the metrics to show Users and New Users ahead of Sessions.

NB: This is an article from GCommerce 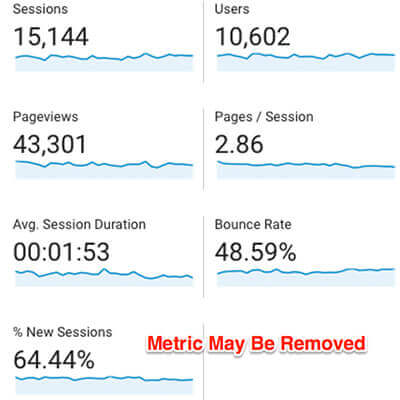 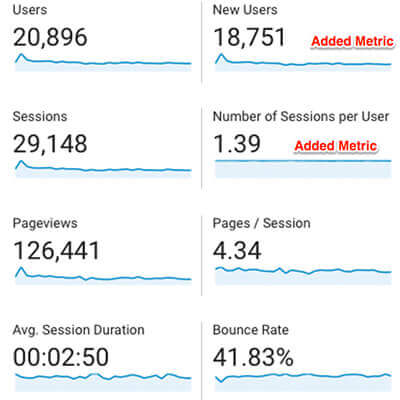 % New Sessions can still be viewed in Custom Reports, Dashboards, and Segments or as a Secondary Dimension on most reports within Google Analytics.

We were unable to find any documentation from Google that they are updating the default views in Analytics. Representatives from Google Analytics would not confirm nor deny any changes, however, a support specialist was able to share over the phone that Google has internal documentation showing that this change is rolling out to all Google Analytics accounts over the next few months. This representative let us know that Google is moving to a focus centered more around Users, rather than Sessions, which is reflected in these updates.

Just last week, Google made an announcement that they would be extending Remarketing List Audiences across devices. They have also made numerous changes over the last few years in the way that ads can be remarketed. It seems that the move to a stronger focus on Users in Google Analytics is an effort to better track and target individual users with ads through Google’s Ad services across all devices, through multiple platforms and channels.

If Google is rolling out other changes with this one, it is yet to be seen. However, we expect Google to continue to advance their tracking, reporting, and advertising to be more user and audience focused with greater opportunities to remarket and segment individual users across devices and through multiple channels within Google’s extensive advertising network.

Related Articles
How to Adapt Hotel Guest Journey using Digital Touchpoints
While the guest journey will still consist of the pre-stay, stay and post-s...
Understanding Google Analytics to Drive Direct Conversions
Google Analytics is arguably one of the most powerful web analytics applic...
Your Direct Channel and Guest Engagement: How They go Hand in Hand
The findings clearly show the correlation between direct bookings and guest...
How Privacy Protection is Changing Email Marketing
With third-party data and many traditional email metrics gone for good, thi...
Google Hotel Ads: Anticipated “check-in date” Multiplier Now Available
The new multiplier on Google Hotel Ads means you can adjust your bid for a ...
The Lazy Way to Use WhatsApp for Your Hotel Marketing
Everyday WhatsApp grows its 1.5 billion monthly users mark. That’s a lot o...