Expedia is wrong: a better direct price does make money for the hotel

Expedia has stated on many occasions that the recent movement of large hotel chains offering the best direct price is detrimental to the hoteliers themselves. We do not share their vision and here is why.

In April, Skift published this interesting and complex graph with which Expedia allegedly proved an 8% decrease in the hotel’s net RevPAR. 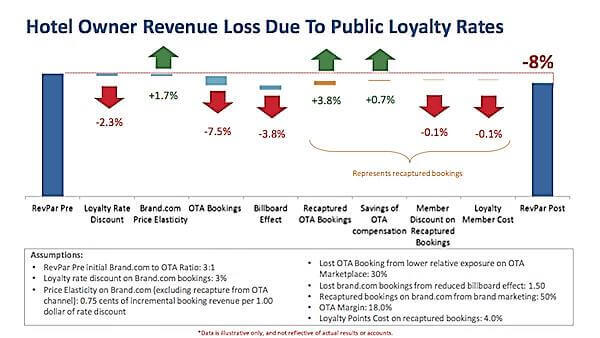 In the supposed starting scenario, the hotel/chain’s website (Brand.com) sells three times more than OTAs. This ratio varies from one hotel to the other and the final result would be affected subject to each ratio. We accept Expedia’s 3:1 scenario. It’s important to remember this proportion to understand the calculations: 75% website – 25% OTA. This ratio, albeit unrealistic in Europe, seems reasonable for the large American hotel chains it’s directed towards.

Expedia posed an apparently correct mathematical analysis and almost all variables were considered, but the numbers are based on unrealistic assumptions. Let’s analyse them.

According to Expedia: -2.3% RevPAR

Expedia estimates the average discount on a hotel website to be of 3%.  (« Loyalty rate discount on Brand.com bookings: 3% »)

Like all price decreases, it has a negative effect on the RevPAR.

Apparently correct yet too simplistic. If every new discount on a channel meant that the hotel lost money, the industry would be in disarray after years of seemingly omnipresent discounts in all distributors. In practice, the hotel can make up for one-off price decreases with general increases in reference prices.

Read rest of the article at Mirai