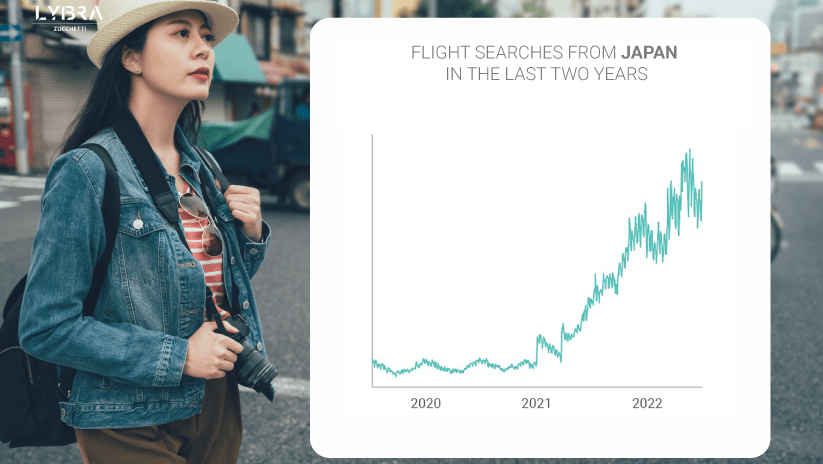 Japanese Return to Travel: Strong Demand But Little For Europe

After more than two years of standstill, we can finally say that Japan’s outgoing travel market is back on track.

The sharp recovery in recent months has finally marked a change of course and it is now clear that tourist demand has restarted. The recovery has actually been hampered by various factors, first and foremost the weakness of the yen, which has had a significant impact on travel prices, and then the rise in fuel prices, but the desire to return to travel has prevailed.

Travellers are adapting their needs and for now demand is mainly focusing on cheaper destinations, but it seems that nothing can hinder the great strength of demand growth.

As we know, Asian countries were the last to reopen their borders, and some of them still have not done so: China, for example, still confirms its Zero-Covid policy, while Japan definitively reopened its borders to international tourists only last month. Similarly, restrictive outbound policies have been equally strict.
During 2021, many countries reopened their borders and accepted tourists from Japan with a low level of restrictions. Demand, however, remained very low because travellers would then have to undergo very strict restrictions when returning home. This trend is also confirmed by the data on travel intentions (graph on the cover), which shows the number of searches for flights made from Japan: it can be clearly seen that until the end of 2021 there were very few people looking for flights, but then the market exploded. In the first three months of the year, the Japanese made around 25 million searches; that is 248% more than in the same period in 2021 (7.1 million) and demand has continued to grow until today. During the last few days (1-7 November) the Japanese made, on average, 740 thousand flight searches per day.

The most sought-after destinations

Where do all these Japanese want to go? Certainly the first channel is domestic, as 45% of flights are to airports within national borders. This primacy is a normal condition, but it is certainly influenced by economic factors: due to the very weak yen Japanese tourists have to carefully consider their travel budget. This leads to a preference for domestic travel, in order to avoid suffering an unfavourable currency exchange rate and seeing their spending capacity lowered.

After Japan, the interest of the Japanese stops at neighbouring countries, especially Korea, Thailand, Vietnam, the Philippines, China, Taiwan and Indonesia.
It should also be noted that there is a very strong interest for the United States of America, which alone accounts for 5% of all foreign searches; it is second only to Korea (9%).

After neighbouring countries and the USA, the third most desired place for the Japanese is Europe, but so far the searches have a very low share. The Japanese who want to go to the UK, for example, are 2% of the total, while for France and Italy they are 1%. Certainly, the data testify to a great upturn in Japanese demand, but for now we should still wait before seeing them invade the streets of European cities of art.

Related Articles
A holistic approach to hotel revenue
NB: This is an article by Rachel Grier, Managing Director of APAC...
3 Tips For Attracting Maximum Market Demand
The hotel industry has undergone drastic changes in last two years, we have...
Hotel Recovery Strategy: Preparing for a Post Crisis World
Make organisation a priority during this downtime and audit your marketing ...
Leveraging Customer Intelligence and Data Analytics to Drive ROI
In today’s ever-evolving hospitality industry, what makes a great marketing...
Delta Variant Stops European Tourism, Leaving Coastal Destinations Crisis
Once again, Europe is locked in new restrictions because of the spread of t...
Improve Results With an Integrated and Agile Internal Control Framework
Internal audit should pivot from a traditional rotating visit approach to a...