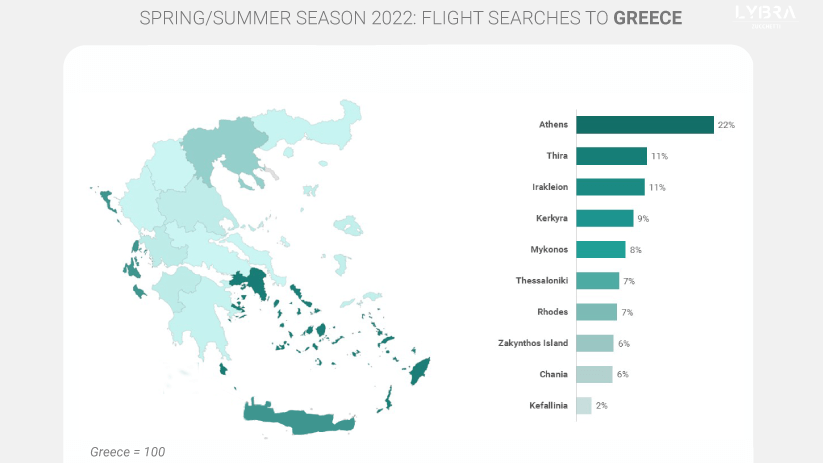 Like other southern European countries, Greece is starting to see the light at the end of the tunnel in 2022.

The health situation is improving, restrictions are easing and tourists, tired after two years of deprivation, are starting to plan their trips. This is the busiest time in the market: the period from January to March is when tourist demand (usually) ramps up, with travelers starting to research and book their next holidays.

Greece is already preparing itself and has started to put strategies into place; a few days ago, Greece lifted the requirement for a negative antigen test for arriving tourists and the country is aiming at improving economic infrastructure, digitalisation and extending the tourist season to support economic recovery of the sector. There is a lot of enthusiasm about 2022 being the year that Greece reaches a recovery in travel flows to 2019 levels; in the words of Minister of Tourism, Vassilis Kikilias: “Greece will play a leading role in tourism in the summer of 2022.”

And indeed, data on travel intentions support Kikilias’ confidence: data on worldwide flight searches to travel to Greece have been following a stable, growth trend for at least five weeks. As of January 3, 2022, the number of searches began to increase more strongly; the average daily growth rate during January was +5.5%, while in December it was +1.9%.

78% of searches in the last thirty days (January 6 – February 7) are concentrated in four regions: Attica is in first place with 22.0%, especially due to the presence of Athens International Airport; followed by the Cyclades Islands (21.5%); the Ionian Islands (17.5%); and the island of Crete (16.8%). The Dodecanese Islands and Central Macedonia also have significant market shares (9.6% and 6.8% respectively), while all other regions have a share of less than 2%.

Considering the demand pressure of the individual airports, and the cities they serve, Athens is in first place with 21.8% of searches; it is followed by Thira (Santorini Island) with 11.3%, Heraklion (Crete Island) with 10.9%, Corfu with 9.1%, Mykonos with 7.8% and Thessaloniki (6.8%).

Travel intentions are strongly geared towards the summer season: unlike Greece’s direct competitors (i.e., Italy, Spain and Portugal), tourist demand for the summer season is (already) much stronger than for the spring. Travel intentions for Greece’s competitor countries are highly concentrated for the spring period, while there is little demand for flights in the summer months. On the other hand, travelers to Greece are primarily looking for travel in July (21% of the total) and June (19.1%), although there is still strong demand for April (19.7%). For trips departing in August, the share is 16.2%, and 15.9% in May. For September and October, demand is still rather low, but it is already active; the shares are 6.1% and 2.1% respectively.

In analysing travel intentions with arrivals in the short term, it is clear that the strong demand for the month of April is almost entirely attributable to a single period; most searches are for flights departing on 15 April (index number 100), while the second most requested date is 14 April (85 on the index). The demand, therefore, is not homogeneous but strongly concentrated for the days before Easter. Many are also looking for flights for April 9th (73 on the index), the beginning of the Catholic Easter Holy Week. Searches are cut in half for the two weekends following Easter and fall sharply from May 5-22; however, for the end of May, there is another increase in searches.

The geographic concentration of searches for the months of April and May does not change significantly: there is only an increase in the market share of Thessaloniki (9.1%) while that of Mykonos decreases (6.1%).

The abolition of Greece’s inbound antigen test and the gradual easing of restrictions across all European countries, interest from the foreign market has grown; 94% of the searches made in the last thirty days came from foreign users and the main markets are mainly foreign. The most active market is the English market, which accounts for 30% of the total; English tourists are very active in the market and are also at the top of Spanish, Italian and Turkish destinations. The other markets of interest for Greece are Germany (14%), Italy (6%) and France (6%), while all other countries have a share of less than 5%.

Related Articles
Capacity Constraints: Managing in a COVID-19 World
Understanding your unconstrained demand together with your yieldable capaci...
How to Create a Winning Social Media Strategy for Your Small Hotel?
Millions of followers and slick brand campaigns are not the only measures o...
50 Tips and Tricks to Turn Website Visitors into Hotel Guests
A common thread through these tips is they all move towards an optimized ho...
Daily Market Share Data Takes Revenue Management Strategy to New Level
Revenue professionals should be using a market share report broken down int...
Rise of Free Room Cancelations Shows No Sign of Slowing
The proliferation of free hotel cancelations policies has been one pandemi...
Revenue Management - Why Automation Rocks
I write this article as the founder of revenue management system, Right Rev...