Can Hotels A/B Test their Rates? OTAs Can…

Marketing, including marketing for hotels, is a lot about testing.

Ask Booking for better reference and how much money they invest, or at least used to invest before the pandemic, for running countless tests on every element in their web pages.

Whilst countless different opinions might arise over what may or may not work, testing is the most scientific way to get to an objective and unanimous conclusion.

A/B testing simply allows to compare 2 versions of a web page against each other. The 2 versions, version A and version B, are exactly the same, except for one single thing, like a button colour, a slightly different descriptive text, a different image, etc.

Therefore, any assessment about what performs best is based on data and facts, not opinions.

What really makes many A/B tests successful (many also fail, ask Booking again…) is the fact that the conditions and the environment in which the test is being conducted are exactly the same between the 2 versions.

However, running a test to see what colour or other marketing-related features perform better is a relatively easy task.

But can the same principle be applied to our hotel rates? Can hotels A/B test their rates?

…Can we A/B test our Revenue Management Strategies?

I guess you might be asking: “Why would we need to A/B test in Revenue? And what exactly can we put at a test?”

I actually never thought of testing when doing Revenue before, till I read the book Thinking, Fast and Slow and, more specifically, the Anchoring Effect.

It may sound too psycho-ish, but in the end it’s quite easy and we all practice and experience anchoring every day.

All sales negotiations involve anchors: the initial pricing point is an anchor. And the perceived value of the object of the negotiation is affected by that.

An even simpler example is the base price of discounted hotel rates:

The initial $100 represents the anchor and, based on that, the perceived value of the final $80 may vary, as opposed to simply seeing $80 with no discount.

Note that I keep talking about perceived value, which is ultimately what affects humans’ behaviours and decisions.

In principle, the higher the anchor, the greater the perceived value.

In the book there are many extraordinary and shocking examples about the anchor effect, that I am not going to further talk about in here.

However, a few weeks ago in my other post Hotel Marketing & Distribution: Something New on the Horizon or Same Old, Same Old? I talked about the example of Agoda.

And in that example, Agoda is essentially running an A/B test on hotels’ rates.

The specific example was this: 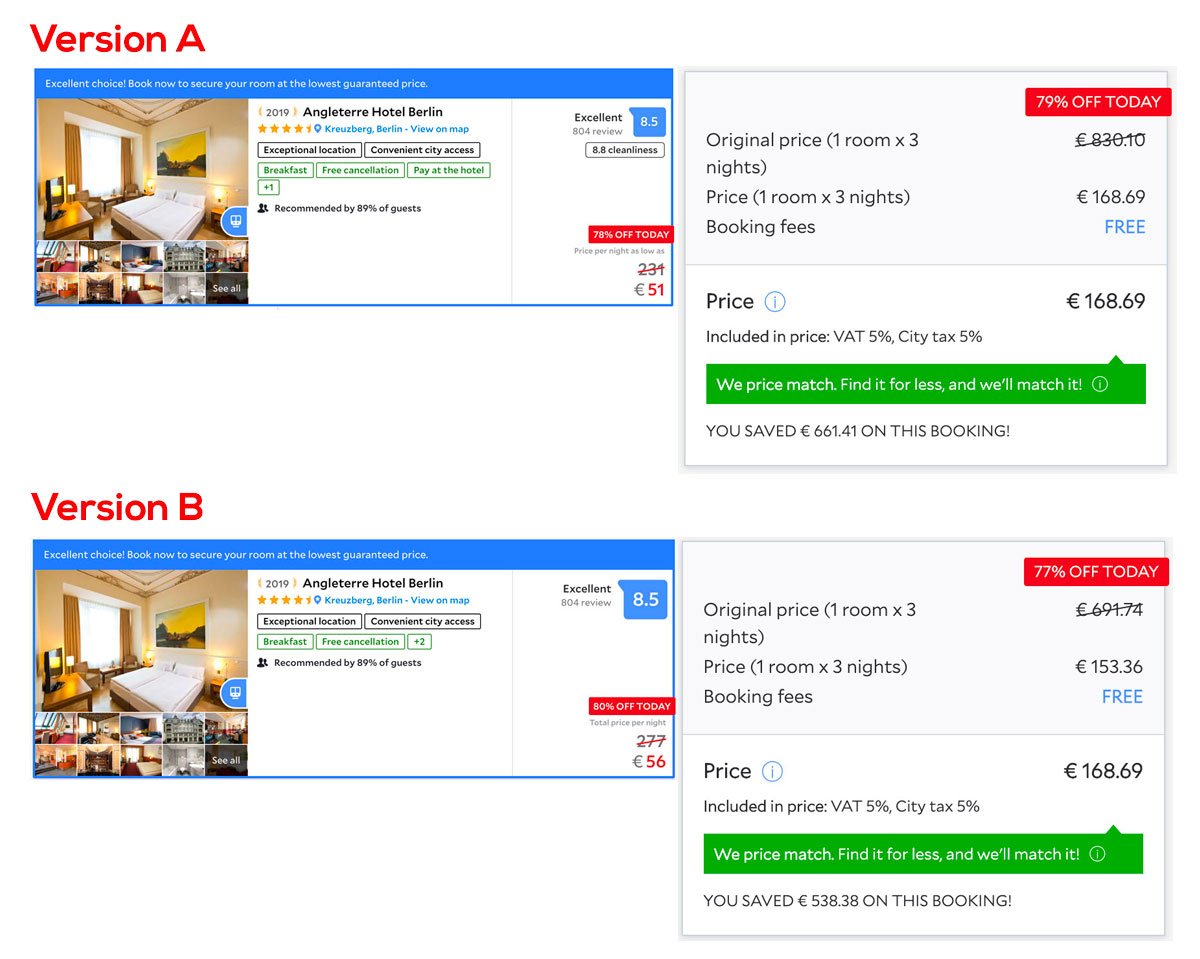 Versions A and B are the result of the exact same search I made: same hotel, same dates, same conditions. The only difference was the country the search came from, as I used a VPN to connect to different countries, even though I was physically on the same very chair I’m sitting right now.

Besides, consider the final price being the same in both versions (€ 168.69), everything else is different.

In the example above, the display price is respectively € 51 and € 56.

Everything is different, but the final price.

To be crystal clear, Agoda is not the only one. Trip.com does the same. EX does the same. Booking…, well, no, Booking no, they don’t need it, they have Agoda that does the dirty job on behalf of the Priceline’s family.

So, why don’t we (hoteliers) do that, too, on our direct channels?

If they do that, why don’t we?

As far as I know there is no PMS, CRS Booking Engine with such a feature. Simple as that.

And the reason why there’s no such feature is even more simple: no one asked before.

That’s what bringing Marketing and Revenue together means.

In fact, when we talk about pricing we simply refer to the final price, either including or excluding taxes.

Which, in the above example, is the same.

Especially from a Revenue Management standpoint, we tend to consider a rate, meaning a price, as a mere number.

But behind every rate, price, number, there’s a psychological path that brings every individual to perceive that value, subjectively.

What instead the OTAs like Agoda have been doing is using what the Hotel Revenue Manager has fed their extranet with, aka the rate, and play around with it from a marketing and sales perspective, so that to find the most appealing combination of base rate (anchor), display rate and discount.

At some point earlier in this post I said “the higher the anchor, the greater the perceived value“.

So why do OTAs A/B test when it would be enough to increase the delta between anchor and final price?

The reason is credibility. The final price must be credible, otherwise skepticism get into play.

Differently put, in general a 90% discount doesn’t work, because it’s not credible. People tend to think there’s something that lies hidden behind such an incredible opportunity. And when skeptical, people run away.

In fact, what I noticed on Agoda and other channels, is that before the pandemic the delta between anchor and final price was slimmer, whilst it tends to skyrocket in these times.

It’s quite borderline, in the sense that the credibility barrier seems to be very close.

But that’s exactly the game: the closer you get to this barrier without breaking it, the more successful your initiative is.

Apparently, considering these times we have been living in, people know hotels all over the globe have difficulties getting tourist and travellers to fill their rooms, so a huge discount of up to 80% may still be credible.

Either way, that’s what Agoda is doing with this A/B test. And they have plenty of data to assess what works and what doesn’t.

And you, have you ever considered doing Revenue A/B tests on your rates?

Actually there’s another and deeper Revenue A/B test I would love to run, but I’ll talk about it in another post.

Related Articles
How the Best Revenue Managers Have Transformed The Profession
The 10,000 or so Hotel Revenue Managers around the world are self-dividing ...
Hotels Need to Guard Against Aggressive Country Rates Campaigns
OTAs choose which POS to show and will ensure the rates do not appear on th...
Your Direct Channel and Guest Engagement: How They go Hand in Hand
The findings clearly show the correlation between direct bookings and guest...
Falling In Love: The Hotel Love Match
Let’s face it hotel technology isn’t a supporting player in the guest exper...
Where Is Travel Tech Headed In The Post Crisis Era?
In the aftermath of the COVID-19 outbreak, the global economy is still unde...
IHG Now Offers Landing Pages and SEO
IHG Brand websites received an upgrade with functionality that allows you ...

10 Ways to Enhance Your Hotel Social Media Presence in 2021 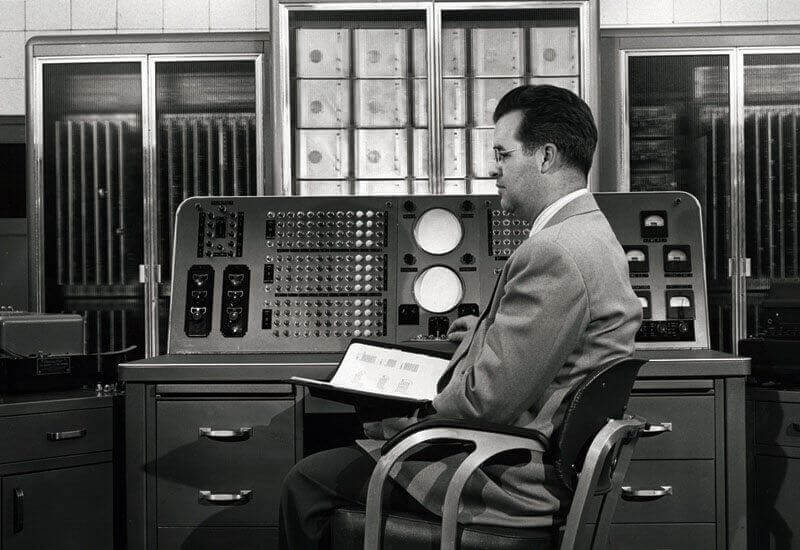 Reflections from 2020: The Rise of Automated Pricing