The One Thing You Can Control With TripAdvisor Reviews

The influence of reviews on traveler’s booking behaviors is well established. Some 95% of travelers consult reviews before making a purchase. And data from TripAdvisor reveals almost all of their visitors consult some 6-12 reviews before purchasing a trip.

Review sites’ direct impact on a hotel’s bottom line has also been well documented. One recent study by Cornell University found that if a hotel increased its review score by 1 point on a 5-point scale, it could increase its prices by 11.2 percent without sacrificing occupancy or market share.

TripAdvisor is the undisputed king when it comes to online hotel reviews. The site reaches over 350 million visitors a month with over 385 million reviews and opinions. It is also the review site most review research is based on. As such, hotels are justifiably preoccupied with their TripAdvisor ratings and reviews, and a lot of the industry literature and advice is similarly focused on ways in which hotels can improve their online standing.

Despite the industry preoccupation, less attention is focused on the exact dynamics of these reviews and the practical and immediate ways in which hoteliers can positively influence guest feedback.

What are the three primary components of a TripAdvisor review?

TripAdvisor ratings are comprised of ratings, from one to five, along three lines: service, location, and value.

For hotels, improving their location score is a relative non-starter – there’s little a hotelier can do to change that.

Making appreciable differences to value is doable, but potentially expensive. A hotel would have to reduce rates or add services and amenities to existing rates, free of charge. Both would mean making less profit per guest to increase your ratings – something for which it would be hard to get ownership buy in.

Service, however, is where hotels can directly control improvements in their online ratings. And despite location and value being given equal billing as prompts for guest reviews, service (both good and bad) invariably becomes the foundation of online feedback.

A 2016 study by the Revenue Strategy Summit (RSS) found service was the top guest issue revealed through online reviews, and by quite some distance at that. 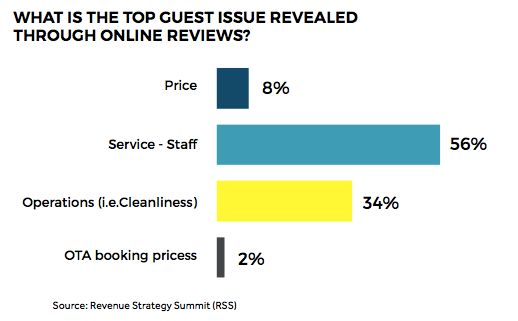 What is “service” when it comes to reviews?

That service is fundamental to a hotel’s overall rating is a giant opportunity for hotels looking to improve their position on TripAdvisor.

Let’s dig into what service really means when it comes to reviews. “Service” in hotels has many forms, but when it comes to reviews, most guest frustrations typically hinge on holes in communication. Specifically, guests express dissatisfaction in reviews over instances in which they made requests that were not (or poorly) fulfilled, or not fulfilled within an expected amount of time.

Related Articles
The Role of Emotional Intelligence in Revenue Management
While writing extensively on Total Revenue Management over the last months,...
Hyper Personalized Hotel Website Content for Mobile?
If you’re looking to increase website mobile conversions, focusing on perso...
Revenue Managers job will change but not eliminated by AI
With buzzwords of machine learning and AI gaining mainstream attention we h...
How To Budget Plan Amidst Uncertainty
With historical forecasts irrelevant, it can be useful to do “budget sprint...
What Should Impact Those ‘Last Minute’ Revenue Decisions?
In our last blog, we looked at just how important making clever revenue dec...
CRM or How to Automate Most of your Retention Strategy and Direct Sales
Retention is key for your hotel. It's helps build a long-term business mode...