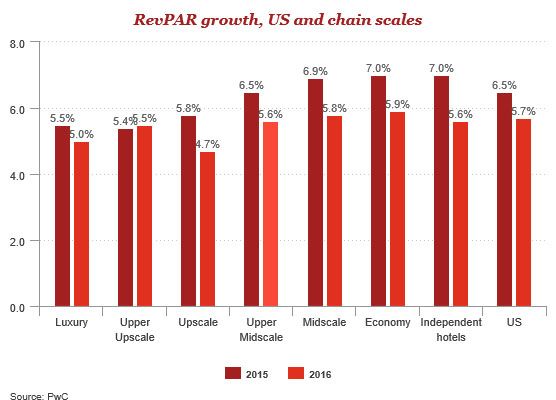 An updated lodging forecast released today by PwC US expects revenue per available room (“RevPAR”) growth in 2015 to be driven more by occupancy than RK, November 11, 2015 – previously expected, as average daily rate (“ADR”) growth continues to look for a firm footing. Recent performance of the lodging industry has surprised industry participants, as solid ADR growth has struggled despite peak occupancy levels, which was expected to have given operators the confidence to drive targeted price increases in many markets. As a result of continued pricing challenges, the outlook for 2015 is reduced moderately, to a RevPAR increase of 6.5 percent, driven by lower-than-previously-expected ADR growth. In 2016, PwC expects RevPAR to grow 5.7 percent, driven by ADR.

The estimates from PwC are based on a quarterly econometric analysis of the lodging sector, using an updated forecast released by Macroeconomic Advisers, LLC in October, and historical statistics supplied by STR and other data providers. Macroeconomic Advisers expects real gross domestic product (“GDP”) to increase 2.2 percent in 2015, followed by a 2.5 percent increase in 2016, measured on a fourth-quarter-over-fourth-quarter basis.

Related Articles
Hotels, Tour Operators, Agencies : 2B or Not B2B in Pandemic Era??
The most successful Hotels were the ones that accepted the challenge and ri...
Forget the 4 P’s of Marketing and let’s look at the 6 P’s of Revenue
Profit has always been important, hasn’t it? and you are correct, but Reven...
The Hotel Mindset: Is It More Like Nokia or Apple?
Has the hotel sector used the pandemic to develop a more customer centric a...
Slow Tourism: What It Is and How Hotels Are Adapting to This New Trend
Slow tourism can be applied across the entire guest stay, representing a si...
Improve Results With an Integrated and Agile Internal Control Framework
Internal audit should pivot from a traditional rotating visit approach to a...
How CRM can Help Hotels with Recovery
Here are just a few ways that you can leverage CRM to ensure you are openin...