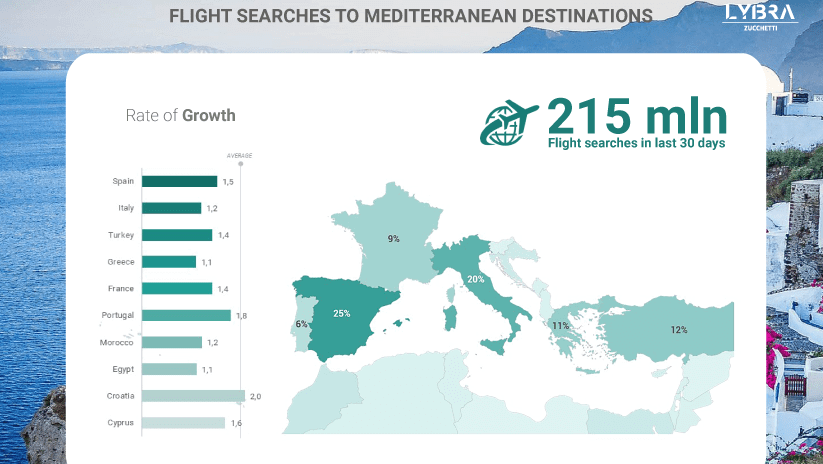 Travel Demand In The Mediterranean Slows Down

The Mediterranean area is historically one of the biggest tourist attractions in the world: southern Europe, as well as northern Africa, are rich in famous destinations.

This area in 2019 attracted about 400 billion tourists (source: UNWTO). In 2022 these destinations are experiencing a renaissance of tourist flows but there are still many conditions that discourage travellers: the war in Ukraine still greatly affects air transport and the sanitary situation is worsening in many countries.

The reaction of tourists to these conditions at the moment is quite positive: considering the data on flight searches, which indicate the travel intentions of users from all over the world, there is a great desire to travel. During the last thirty days (5 June – 4 July), 215 million searches were carried out for the Mediterranean area, an absolute increase, considering that in the same period of 2021 there were 35 million.

Spain, Italy, Turkey and Greece are undoubtedly the countries that most capture the interest of tourists: travel demand is so concentrated that these four countries together account for 68% of all research. In particular, Spain is in the first position with 54 million researches (25%), followed by Italy with 42 million (20%), Turkey with 26 million (12%) and Greece with 24 million (11%). Apart from France (9%), all the other countries have a share of less than 6%: they are mainly the North African countries, the Middle Eastern countries and those of the central area of the Balkan coast.

These are data that, in part, follow pre-Covid tourism trends, but also reflect noticeable changes attributable to the current situation, both sanitary and political. Italy, for example, despite occupying a good second place in the above ranking, is still suffering the effects of the pandemic. Indeed, because of the new increase in infections, in recent weeks searches for flights to Italian airports tend to decrease. In Italy tourism demand is growing, but at a lower rate than in the other countries mentioned above: the average growth daily rate of the last thirty days is +1.5%, which anyway is close to the average of the Mediterranean area (+1.9%).

It must be said, however, that, compared to the same period of 2021, Italy is the country with the highest tourist flows recovery rate. Spain, on the other hand, has a very different history: if in 2021 it was alone in the first position for the number of searches and growth rate, now it seems to have slowed down, although maintaining the top position. For France, Greece and Portugal, growth has always been positive but more linear.

According to our data, tourists are showing an increasing interest especially for the airports of Croatia and Israel (which grow, respectively, by +2.0%), and Slovenia (+2.1%).

Related Articles
Net ADR: The Most Important KPI You Should Pay Attention To
A rigorous net ADR analysis, that also takes into account discounts and all...
Your Starting Price Is Key To Success
How do you then find the correct price point from the start? The answer lie...
How to Measure Your Hotel Profitability
Understanding hotel profitability ratios isn’t always straightforward becau...
SEO in Post Covid-19 World: What Hoteliers Need to Know and Do
Falling organic traffic to your website does not mean SEO is redundant. On ...
Hotel Benchmarking: Coffee Time Chat with Peter Brauer and Henrik Karlsson
As we start to come out of the pandemic what is the impact, and engagement,...
Why Direct Selling is Experiencing its Sweetest Moment
Direct selling, both telephone and website, has gained a large share of sal...