Q. What are the big global trends that you’ve seen in the past year?

Consolidation, circle of disruption, same old hotel battles, India/China vs the rest of the world

What have been the effects of consolidation on the OTA market? Is China the only market not dominated by global players? 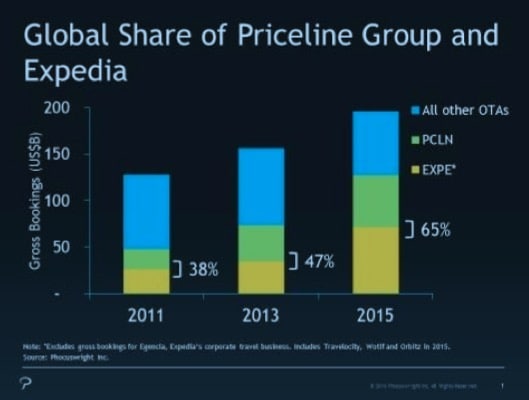 There are still some thriving local players but they are few and far between. For example, the largest OTA in LATAM, Despegar, got a big investment from Expedia, but there are still some smaller, local players there (e.g, Viajnet expects 20% growth this year). Same in Russia, where over 30 local OTAs like OKTOGO and OneTwoTrip compete with Booking.com and Expedia. Some markets, like the Middle East, are virtually all global players.

But there have been signs of trouble – Unister in Germany has had a tragic ending and Hotel Urbano’s founders had to buy the company back from investors after failing to perform.

The reality is that there are two global giants and everyone else.

Asia continues to be an outlier. The local and regional players thrive vs. global players, especially in China and Japan. And though there has been consolidation, whatever is happening has created a healthy marketplace.

Take a look at the online travel market growth for APAC vs. the rest of the world, and it’s ahead of most regions except the Middle East. Keep in the mind the Middle East is small, roughly one fifth the size of APAC! 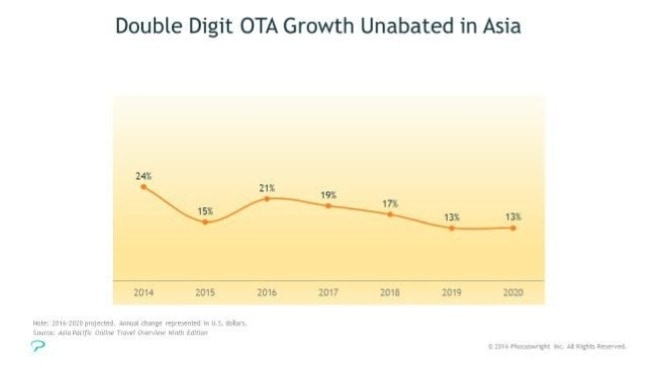 Well it might seem like Ctrip has taken over China with its acquisitions of competitors Qunar and eLong, and investments in Tunio, eHi, Tujia … more than a dozen consumer-facing travel brands. But it does have competition. There’s Alitrip, there’s Meituan-Dianping, hotel specialists.

Same in Japan … Rakuten and Recruit are leaders but there’s several other OTAs competing in the marketplace like iJTB and travel.jp/hotel.jp and ikyu.com. India has Cleartrip, MMT, Yatra, Goibibo. The point is that while there is consolidation and global players we still don’t see much impact on the growth of local and regional OTAs in Asia.

Related Articles
Effective Tools to Increase Visibility When Using Booking
Almost all hotels in the world are live on the channel, and for sure visibi...
How to Adapt Hotel Guest Journey using Digital Touchpoints
While the guest journey will still consist of the pre-stay, stay and post-s...
5 Tips to Step up Your Hotel Website Messaging Design
Having an on-brand design for your website may be the key in connecting wit...
Digital Marketing Timeline for New Hotel Opening

How The Modern Marketing Funnel Helps You Get More Bookings?

Are You Planning to Include a Payment Gateway in Direct Sales Channel?
The reactivation of the demand for hotels has led many hotels to seek infor...