The latest analysis from Amadeus uses a “scenario planning” methodology to paint a picture of what the future might hold for online travel agents.

But unlike many similar projects, the future Amadeus looks at is only three years away – the paper is titled “Online Travel 2020, Evolve, Expand or Expire”.

At the start of the paper, it summarises its thoughts visually, illustrating the current and future complexities of the global online travel market. 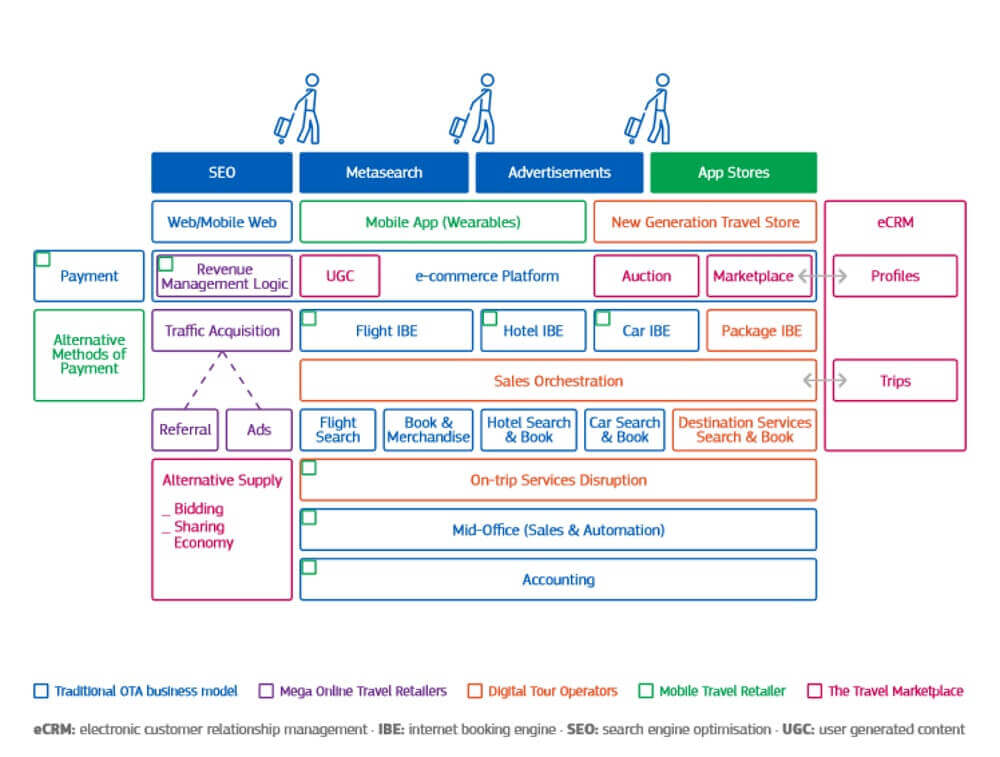 Each of the four scenarios suggested by Amadeus is a viable extension of the current online travel market. The scenario of “digital tour operators” is subtly different from a virtual tour operator, which is how online travel agencies were often described in their early days.

A virtual tour operator (as distinct from a vertically integrated tour operator) owns no inventory such as planes or hotels or high street shops or cruise ships or dead-tree brochures. It is a tech platform which puts other people’s inventory in front of travellers.

Part of the digital tour operator setup, as Amadeus sees it, involves servicing the customer throughout the journey via mobile devices which work in conjunction with real people.

“This new type of Travel Mate (aka travel agent) will also be able to cross-sell at the destination, making suggestions about where to go or what to see, enabling customers to be put into direct contact with potential providers of a service at the destination.”

Amadeus doesn’t name names, but the digital tour operator scenario could go both ways. In Europe, TUI and Thomas Cook have tried, with varying degrees of success, to create concept stores and apps which support their owned inventory and high street shops.

Related Articles
Spain: Strong German Travel Interest Uptick in Major Tourist Destinations
This data will help Spanish destinations update their revenue management an...
If You’re Hoping for a Bounce Back Later, Focus on Your Hotel Technology.
Setting up or restarting technology you may have paused can be an ordeal. S...
Implementing direct bookings within the online distribution jungle
The world is on the move. Tourist arrivals and spending on leisure tourism ...
How to Align Your Distribution and Marketing Strategies to Boost Revenue
Many hotels don't include direct within their distribution cost calculation...
Ready for Recovery? Your Direct Booking Action Plan
Giving guests, potential guests, and website visitors innovative incentives...
7 Hotel Commercial Mistakes and What To Do About Them
7 key findings, let us call them ‘Commercial Mistakes’ the property was mak...