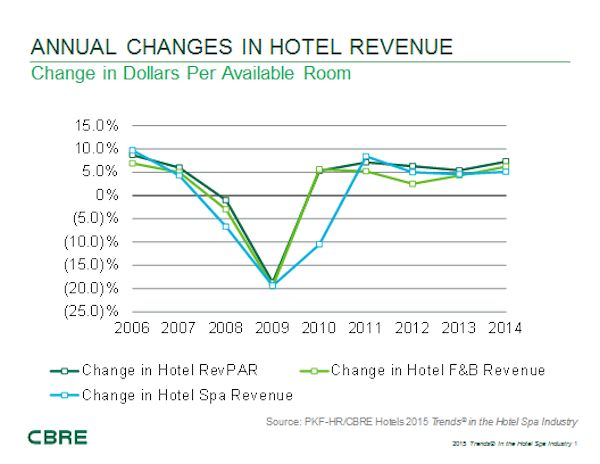 Coming out of the great recession, U.S. hotel operators struggled to earn revenue from sources other than the rental of guest rooms.  However, in 2014, we began to see guests spend their money in other areas of the hotel.  According to the 2015 edition of Trends® in the Hotel Industry, rooms revenue increased by 7.3 percent in 2014.  Concurrently, revenue within the food and beverage and other-operated departments grew by 6.2 percent.

One example of an other-operated department enjoying growth is the hotel spa.  In 2014 hotel spa revenues increased by 5.1 percent, while department profits grew 10.5 percent.  To evaluate how hotel spas achieved their gains in revenue and profits we analyzed the results of our firm’s 2015 Trends® in the Hotel Spa Industry report.

Spa revenues increased by 5.1 percent for the overall survey sample, but we did observe differences based on property type.  Spas operated within urban hotel properties enjoyed a stronger 7.0 percent gain in revenue.  This is consistent with the strong performance of the primary urban markets, and the return of group demand.  Lagging somewhat were resort hotel spas.  These properties saw their spa revenues increase by 4.4 percent. 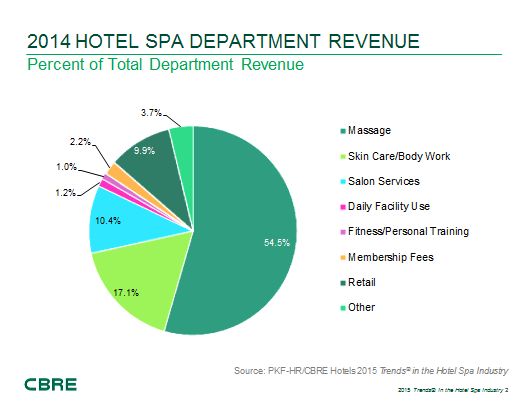 Massage services continue generate the most revenue for hotel spas.  In 2014, massage revenue comprised 54.5 percent of total spa department revenue, followed by sales from skin care/body work (17.1%), salon services (10.4%), and retail operations (9.9%).  Revenues from these major sources all increased in the 4.0 to 5.0 percent range from 2013 to 2014.

Leading in revenue growth on a percentage basis were the fees generated from selling memberships to local patrons.  Revenues from local residents and members contribute 59 percent of the revenue earned by urban hotel spas.  Resort hotels, on the other hand, earn the majority (62%) of their revenue from hotel guests.

Only two sources of spa revenue suffered declines in 2014.  They were daily use fees and health and wellness services.  Given the rise in hotel occupancy levels, it appears that spa managers needed to limit the opportunities for local patrons to use their facilities on a one-off basis.  It should be noted that only a small percentage (3%) of properties reported revenue from health and wellness.

Read rest of the article at: Hotel Online

Hotel M&E: Changing World, Creative Ideas, Ancillary Revenue.....Really?
We question whether meetings, groups and event revenue should still be cons...
Most Significant Cause for Decreasing Travel Demand in Europe
Although Europe is suffering from the new wave of contagion, tourist demand...
Guest Messaging Will Make Hotel Staff More Efficient – Here’s The Proof
Automating only certain guest messaging and tasks cut out unnecessary steps...